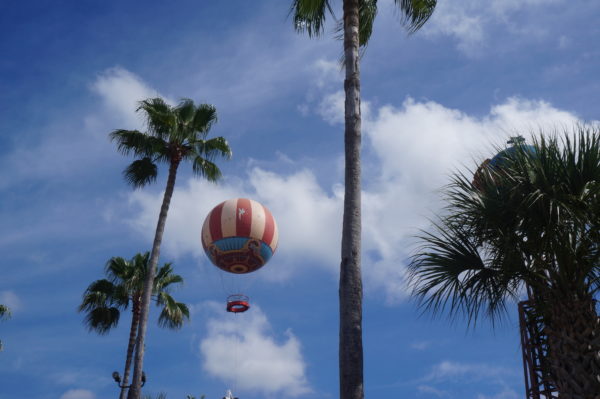 Characters in Flight above the palm trees

Characters In Flight Balloon at Disney Springs Renamed to Aerophile

You’ve likely heard by now that the shopping district formerly known as Downtown Disney was rethemed, expanded, and renamed Disney Springs in recent years. The whole area has a new feel that is very serene and incorporates water in beautiful ways.

The balloon also got a new look. The bright red and yellow balloon with Disney characters on the side has been replaced with a new balloon with a blue swirl motif inspired by the element of water in the area. It fits better into the area, and it almost blends in as it floats in the sky or lands on Lake Buena Vista.

What hasn’t changed is the breathtaking 360-degree views you get of Walt Disney World property as you fly 400 feet in the air for around 10 minutes. If you’ve never experienced this, it really is something you should try on your next vacation.

You can purchase tickets on site at a cost of $20 for adults and $15 for children. If you’re a bargain shopper, you can arrive before 10am and pay just $10 no matter the age. Since the attraction opens at 8:30am, you’ll have plenty of time to fly high for the discounted rate.

Have you tried  the Aerophile balloon at Disney Springs?