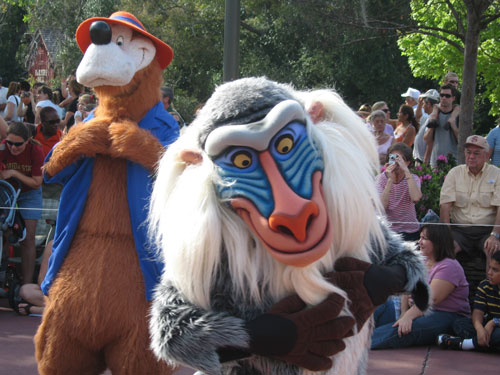 If you think that Disney’s Animal Kingdom is lacking in the character meet and greet department, think again!

There are plenty of places to see characters in this park.  Let’s take a look:

Upcountry Landing in Asia near Flights of Wonder houses a really fun character meet and greet with Baloo and King Louie, King of the Apes. These characters were part of the beloved original Jungle Book and came to life in the live action movie released in 2016. Baloo was even part of the cartoon series, Tailspin.

This is a holy grail of sorts for meet and greets because you get two characters for one wait time. Even better, these big, furry lovables are located in a shaded area, and shade is at a premium in Animal Kingdom!

Too many people skip Rafiki’s Planet Watch and the Conservation Station fearing the 14-minute round-trip will waste time. This is an unfortunate misconception because this area is really great.

Not only will you get to meet the area’s namesake, Rafiki, but you’ll also find Chip & Dale and occasionally Jiminy Cricket. Chip and Dale are pretty easy to find elsewhere, but Rafiki is harder to find and Jiminy Cricket is nearly impossible. In fact, he only appears here on Earth Day!

In addition to the characters, you’ll get to “meet and greet” actual animals, too! This area has a live petting zoo with gigantic pigs, fun goats, fuzzy lambs, and a cow to name just a few.

Since the Conservation Station’s main goal is conservation, you’ll learn how to conserve in your own life and about the research that Disney does to make a more sustainable future for us and for our animals.

Near Dinosaur, you’ll find Donald Duck positioned in front of a cool backdrop picture. Even though Donald is almost everywhere these days, he’s still a great classic character to meet.

Up! was such a wonderful movie, so meeting a couple of the main characters is a great opportunity. This is another two-for-one deal, so it’s worth the wait. However, the line is hardly ever longer than 20 minutes. What’s more, this is the only place that Dug and Russell appear in Disney World.

If you liked A Bug’s Life, you have to stop here to see Flik. He’s situated in a little nook off the trail, and many people miss him and walk right by. He can be a little difficult to find, but if you pass Starbucks, you’ve gone too far.

You can also meet Tarzan and sometimes even Jane in this area. Tarzan moves regularly, but this is his current home near the Island Mercantile. He isn’t always here, so check the times guide or the MyDisneyExperience app to confirm.

Another character that moves pretty often is Pocahontas. However, she’s currently located at the Character Landing across from Flame Tree Barbecue and Isle of Java. With few princesses and face characters in Animal Kingdom, Pocahontas is a welcome sight.

Goofy and Pluto hang out at the Service Station in Dinoland across from TriceraTop Spin. This is quite the quirky location, but it’s meant to be that way. Don’t skip over the area because you think it’s just a cheap carnival area. It’s so much more than that!

Adventurers Outpost is located behind It’s Tough to be a Bug and before you cross the bridge toward Yak & Yeti and Flights of Wonder. Here, you can meet Safari Mickey and Minnie Mouse. This is the only character meet and greet in Animal Kingdom that offers a FastPass+ option, but the wait is usually only 20 minutes or so. Since the wait time for Kali River Rapids and Kilimanjaro Safari is longer than that, save your FP+ for one of those rides.

Who is your favorite character in Animal Kingdom?