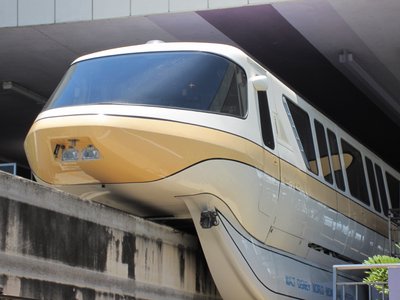 Changes To Buses, Roads, And Even Monorails At Disney World

I wish I was announcing a new monorail line at Disney World, or a futuristic personal rapid transit (PRT) system, but that doesn’t seem to be in the cards right now. But sometimes the little changes add up to a big impact over time. And these days we are seeing plenty of little changes coming to Disney’s transportation systems.

Upwards of 50 million people visit Disney World each year and move around nearly 40 square miles of territory. Nearly all of them use Disney transportation in some form. Given all that, moving people from one place to another at Disney World is a big job. And since people are on vacation and generally paying big bucks, they aren’t very interested in dealing with the hassles that often come with day-to-day transportation back in the real world.

Fortunately, Samuel Lau who is the Vice President of Transportation at Disney World, is on the job and making improvements. Let’s look at some of the changes that are in the works as reports by Attractions Magazine (Source).

While I don’t think that Walt had envisioned a fleet of buses shuttling people around his beautiful master-planned resort, the reality is that most people who use Disney transportation use these workhorses. The Disney system has more than 300 buses, which is more than many medium sized cities have in their fleets.

Disney is planning for growth. Disney is adding 28 new buses and is also testing and purchasing a few articulated buses – those mega-vehicles that are made of two pieces connected together. They are also installing cameras on the outside of the bus so there are records in case something happens.

Since Disney will have more people to move around with the new Fantasyland opening and Disney’s Art Of Animation Resort, improving this service is a priority.

Are new monorails coming? Sadly the answer is no – at least as best we can tell. However, Disney is installing a new computer-based control system which will both control and monitor the monorail trains. The new system will allow Disney to centrally control the trains. It seems that the monorail pilots will no longer actively control the trains. They will still be there, but they will allow the train’s motion and make announcements instead of actually driving the monorails.

The system will speed up trains that are running behind, and create safety zones around each monorail. It also will allow the entire set of trains to continue operating when trains are switching tracks, instead of stopping the entire system as has happened in the past.

It will take up to a few years to fully implement this system.

Disney extended the turn lane that comes out of the main Disney’s Hollywood Studios roadway and goes right on Buena Vista Drive toward Victory Way and on to Disney’s Art Of Animation Resort. This was often a source of congestion, so this is a welcome change.

Many of these changes seem very pedestrian (pun intended), but all these types of changes add up to better service. And better service means less time in transit and more time having fun.