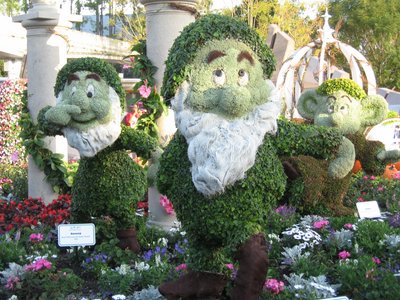 Five Changes To Expect At Disney World In 2013

If there is one thing you can count on, it is change at Disney World. Most of these changes are good, but occasionally they aren’t – like when Disney removes something you love, or when a Disney World vacation becomes more expensive.

We had an especially big year in 2012 for Disney World changes, with a new Disney Resort Hotel, Test Track, and Fantasyland. While 2013 might not be quite a big, we still expect some significant changes. Here are the top five items to look for in 2013:

1 – The Seven Dwarfs Mine Train

Most of the new Fantasyland officially opened in December, 2012, including Enchanted Tales With Belle, Gaston’s Tavern, the Be Our Guest restaurant, and Under the Sea – Journey of the Little Mermaid, which is a classic Disney dark ride. But the transformation of Fantasyland isn’t quite done. There is still a huge construction site in the middle of the land that will become the home of Disney’s latest mountain –The Seven Dwarfs Mine Train. Combining a dark ride and a roller coaster, I personally can’t wait to see how Disney uses some innovative ride technologies with a classic story to present a new signature attraction.  This attraction isn’t supposed to open until 2014, but we will see much more of it rising above the construction walls in 2013.

Snow White’s Scary Adventures closed in May, 2012 to allow for construction of the new meet and greet area that will occupy the same location called Princess Fairytale Hall. Featuring plenty of stonework and stained glass, guests will wait in a large gallery with Disney portraits. When their turn comes up, they will enter smaller, more intimate rooms to meet Disney princesses including Cinderella, Jasmine, Snow White, Aurora, Tiana, and Rapunzel . Rumor has it that participants in FastPass Plus will be able to provide personal data so that the princess can greet children by name and with personal knowledge, like “Hello Sally, it’s so good to see you. Is your dog Fluffy with you today?”

Disney announced that their 2013 promotion will revolve around week-long themes and celebrations, each available for just a limited period of time. Expect things like special decorations for Valentine’s Day, or Disney Villains showing up on Friday, September 13. Many of the special events will not be announced in advance.

While there has been no official announcement about specific testing dates, I think it is a good bet that we will see more and more testing of the new FastPass Plus program. Details are starting to emerge, like the news about the Magic Band.  Emerging details suggest that guests staying at a Disney World Resort will be able to book events and attraction times before they leave home. Fan reaction to the concept has been mixed, with some people concerned that only those super-planners or high-spenders will see the benefits of the program. But Disney is pretty smart about these things, and I suspect they will continue to test and adjust until they have a program that is generally well received.

This is another item that hasn’t been specifically announced, but I would bet the $12 dollars in my wallet that we are sure to see price increases at Disney World. With all the billions that Disney has invested recently, especially with all the new fun in 2012, we can understand why Disney will raise prices – even if nobody ever likes that. Nearly every summer, around June, Disney increases prices. Look for increases to food, hotel rooms, the Disney Dining Plan, and theme park admission ticket prices.

All of the items above are already formally announced or are sure bets. We are likely to see other changes too. Perhaps 2013 will be the year that Disney announces they will build a clone of the popular Cars Land at Disney World? Or maybe we will finally see a plan for how to prop up a sagging Disney Springs, taking care of many of the empty storefronts that occupy the former Pleasure Island area? And perhaps we will start to see some more details and concept art about the new Avatar Land that will be coming to Disney’s Animal Kingdom?

What are you looking forward to in 2013?