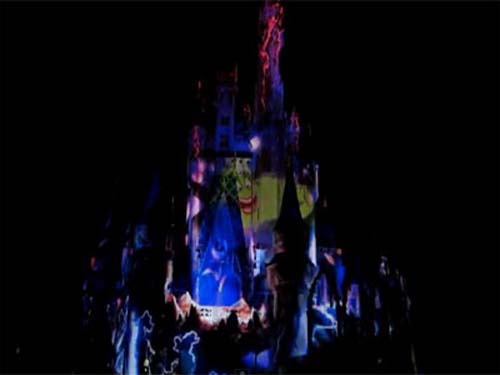 Celebrate The Magic, a show in which Disney projects animations onto Cinderella Castle, has been in operation for a few years.

When it was first announced, many fans had high hopes that Disney would frequently update the show since all the content was digital and was relatively easy to change.

There had been previous hopes for updates to digital shows like Star Tours and Toy Story Mania, but Disney made relatively few updates.

With this new Castle projection show, it seems Disney is coming through. Back in 2013, Disney made an update to the show.  At the time, it was the third update Disney had made to the show since its debut. Disney made previous updates for Christmas and summer time.

Disney added several new segments with scary characters, including Ursula from The Little Mermaid, Chernabog from Fantasia, and a fire breathing dragon.

The changes are shown from September to November, up to the date of the last presentation of Mickey’s Not So Scary Halloween Party.

Look for the updates at around the seven minute mark in the video below.