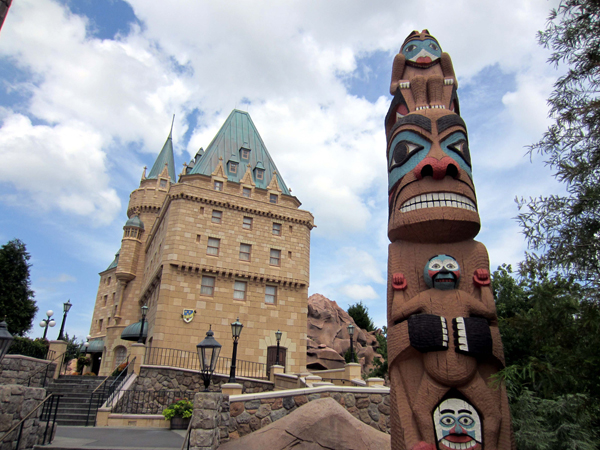 Canada has a rich history of Aboriginal peoples and European colonization, but on July 1st, 1867, the area officially became “Canada.”

It started with Ontario, Quebec, Nova Scotia, and New Brunswick and later expanded to the west. Canada has remained under British control resulting in Canada’s entry into WWI and WWII. It wasn’t until 1965 when Canada adopted the Maple Leaf Flag as a new sense of identity and 1969 when they officially became bilingual with English and French.

Canada, by area, is the second largest country in the world but only the fourth if you count just the land, and it has the longest coastline in the world and the longest land border with the United States. In fact, 80% of the population lives within 93 miles of the US Border. Much of the upper portion is covered in ice and permafrost.

Why did I just give you a ton of seemingly useless Canadian history? Because Epcot is celebrating Canada’s 150th anniversary with commemorative buttons much like the ones you’d get for your birthday, your first visit, or your honeymoon.

When you visit the Canada Pavilion in Epcot’s World Showcase now through July 1st, Canada’s actual birthday, you’re invited to participate in a question and answer session with a Cast Member. If you can answer the question, they’ll give you a button!

Disney isn’t releasing the questions they’re asking, but some guests have reported that one question is “what do Canadians call the $1 coin?” and “Who hosts Hockey Night in Canada’s Coach’s Corner?”

Buttons are free and available to anyone while supplies last, so study up on your Canadian trivia!

Will you visit the Canadian Pavilion in Epcot to celebrate Canada’s birthday?