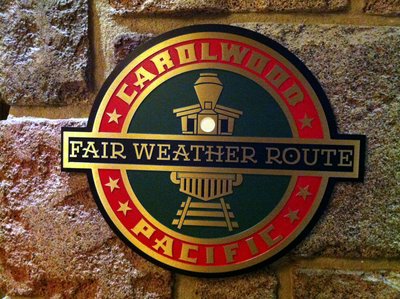 In 1949, Walt and his family moved to a home at 355 N. Carolwood Drive in Holmby Hills, California. At that time, two of Walt’s animators – Ward Kimble and Ollie Johnson – had their own backyard railroads. Walt decided to build his own – a one-eighth scale model steam train. He built more than 2,500 feet of track that circled the house and routed around his wife’s flower beds. Wisely, he named the train the Lilly Belle in honor of his wife Lillian.

Walt controlled the train from a special barn that both housed the trains and held a central control console.

The Train Started Running in 1950

According to Wikipedia, the train first ran in 1950. Walt used it to entertain his daughters and their friends. Her reportedly spent thousands of hours on the project.

Legend has it that one time the working steam train tipped over, slightly hurting the girl who was riding at the time – and that was the end of free rides on the train. However, it was probably the start of an idea that lead to the development of Disneyland.

The Current Home Of Walt’s Barn

When Walt’s home in Holmby Hills was sold in 1998, the new owner planned to tear down the barn. The barn was moved to a railroad museum in Los Angeles. There, volunteers from the Carolwood Pacific Historical Society open the barn for tours, where visitors can see displays of Walt Disney’s trains.

Fortunately, you don’t have to go all the way to California to see pieces of Disney railroad history. If you plan to visit Disney World, you can see many great photos and artifacts there. Let’s take a look at some pictures of the Carolwood Pacific Room in the Villas at Disney’s Wilderness Lodge.