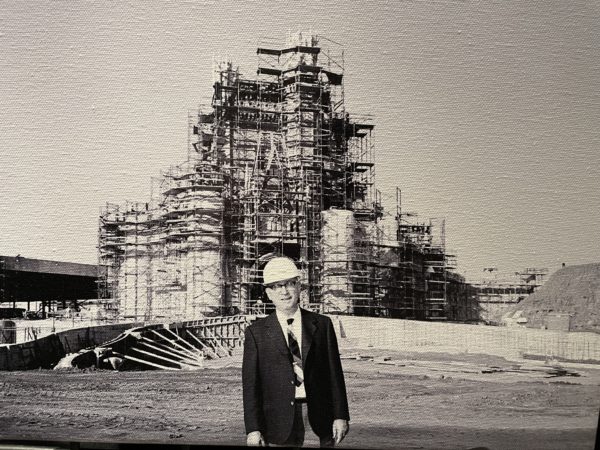 When Walt Disney was scouting for land for his Florida Project, the land he found in Orlando was a perfect location. The temperature was comfortable year-round, it was inland enough to be shielded from tropical weather patterns, and there was enough wide-open space for Walt and his Imagineers to dream big!

Let’s take a look at the construction of Disney World from the very beginning to more recently.

Magic Kingdom was the first park built in Disney World. The photo below shows the park entrance in the lower part of the photo and some of the buildings that would become Main Street, USA at the top of the photo.

The original plan for World Showcase was for countries to sponsor their pavilions to shoulder construction costs. However, only two countries agreed to sponsor pavilions, so Disney instead shouldered the construction and maintenance costs for most of the pavilions.

Disney-MGM Studios was the third park built in Walt Disney World. This park originally started as a partnership between Disney and MGM because the park was to be a working movie production set. Later, the two companies parted ways, and Disney became solely responsible for the park. This also meant that much of the movie production halted.

Disney’s Animal Kingdom was the fourth and final park to be added to Disney World. Walt envisioned a ride with live animals, but his advisors warned that he couldn’t control animals’ movements and actions. The ride would become Jungle Cruise in Magic Kingdom, and it would use animatronic animals. However, Animal Kingdom fulfilled this dream more than 30 years after Walt’s death.

Do you enjoy seeing historical Disney World photos from the Disney Archives?