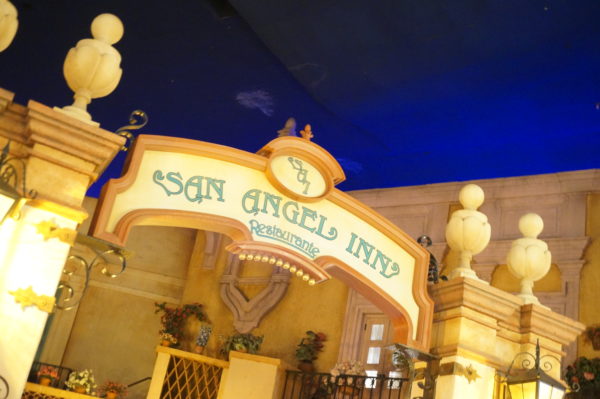 Dining in Disney World is an experience in itself. There are hundreds of restaurants from quick/counter-service to fancy and luxurious table-service dining. Regardless of what you choose, you’ll get great food even when it’s “fast”.

The 50s Prime Time Café in Disney’s Hollywood Studios‘ Echo Lake will transport you back to a time when families ate together every night and Mom had a homemade meal ready on the table when Dad got home. Expect homemade comfort food and lots of 50s theming! Mind your manners, eat your veggies, and keep your elbows off the table, or the Cast Members will scold you!

The Coral Reef Restaurant is kind of a hidden gem. It’s tucked in the corner to the right side of The Seas pavilion in Epcot‘s Future World. There’s a ton of variety on the menu from surf to turf and even vegan options.

The best part about this restaurant is that it has beautiful views of the second largest aquarium in the entire world with a ton of marine life from sharks and stingrays to tiny fish.

Le Cellier Steakhouse is not only one of the best restaurants in World Showcase, but it’s high on the list in the whole resort. The menu includes tender steaks as well as delectable seafood and even Poutine! The restaurant in the Canada Pavilion has a very cozy atmosphere with stone arches and redwood on the walls with flickering candles to light the room. It’s one of the most romantic settings in all of Disney World!

Just around the loop in World Showcase is the Mexico Pavilion where you’ll find the San Angel Inn Restaurante in the theme of a 17th century la hacienda. It’s located inside the Mayan pyramid, so there aren’t any views of the outside; however, this makes it a totally immersive experience. You’ll have sweeping views of the Mexican jungle with the Mayan Ruins. If you’re lucky, you might even see a volcanic eruption!

Right next door is the Akershus Royal Banquet Hall in Norway. This is an excellent, although often overlooked, character dining experience. It’s a great way to meet some of the most popular Disney Princesses without paying huge prices. The drawback is that the food is classically Norwegian, so it will be unfamiliar and some picky eaters might be turned off.

Chefs de France is a unique dining experience in the France Pavilion. You’ll feel like you’re dining in a Parisian café with a full menu of French appetizers, entrees, and of course desserts. There’s some amazing views of the pavilion like fountains and stores.

Crystal Palace is a character dining experience in the Hub of Magic Kingdom with Winnie the Pooh and Friends. It’s not the best character dining choice because it’s a really large restaurant so you don’t get to spend a lot of time with the characters, but the restaurant is beautifully themed after 18th Century Victorian Greenhouses. With high ceilings, lots of windows, and plenty of greenery, it’s a beautiful place to eat! If you can schedule your Advanced Dining Reservations in the early morning hours, you’ll get to experience a nearly empty Magic Kingdom and have the opportunity to get some incredible pictures!

Be Our Guest is a newer restaurant in Magic Kingdom part of the New Fantasyland project that was completed in 2012. This is the only place in Disney World where you can meet Beast, and you get to do it inside his castle set in the French Countryside. With forced perspective, you feel removed from town.

Cinderella’s Royal Table is arguably the most quintessential restaurant in all of Disney World. It’s right inside Cinderella Castle, and you get to meet Cinderella, Ariel, Snow White, Aurora, and Jasmine.

Cinderella’s Royal Table is widely considered one of the best table-service restaurants in Disney World as evidenced by the fact that it always sells out of Advanced Dining Reservations very quickly as early as six months before a dining date.

Why is it so unforgettable? I’m sure it has to do with meeting some of Disney’s most loved princesses, but you can also get a unique and amazing view of Magic Kingdom’s nighttime spectacular, Happily Ever After, if you schedule your dinner later in the evening.

People don’t talk about the food much here because there’s so much else to talk about. However, the food is really good. Breakfast is served to your table with typical breakfast items like French toast, steak and eggs, and pastries. Dinner is fit for royalty with both surf and turf options plus special dishes for the kids.

Cinderella’s Royal Table is definitely one that should be high on your bucket list!

What Disney World restaurant is on your bucket list?