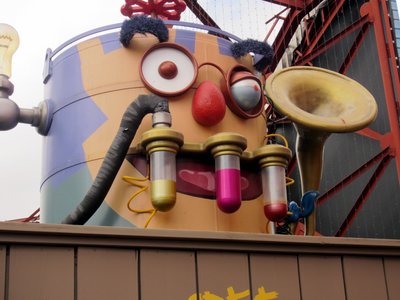 Disney World is generally a very safe place to visit, with 120 million people (source) visiting the parks each year. And nearly every one of those people has a safe and fun time.

But sometimes the crazy things from the “real world” sneak their way into the fairy-tale world of Disney.

It is a reminder that even at the most magical place on earth we need to be vigilant.

Let’s take a look at two crazy and unrelated events that happened recently:

A grandmother and her grandson got into the Dinosaur ride at Disney’s Animal Kingdom and found a very unpleasant surprise – a loaded automatic pistol. The child found the gun which was loaded with hollow-point bullets, and he gave it to his grandmother. The grandmother then turned the gun over to a Disney cast member, who in turn called a manager (source).

The owner of the gun, Angelo Lista, said he discovered the gun several minutes after he exited the ride. He notified authorities right away. He had a permit to carry concealed weapons (source).

“Guns are not permitted on property. As soon as we were made aware of the situation we contacted [the Orange County Sheriff’s Office] and they took possession of the weapon. Guest was escorted to this car and was not allowed to return.”

Mr. Lista said that he thought guns were permitted, especially since there is a security bag check at the entrance to each park – which Mr. Lista obviously passed through.

And here is an unrelated but also crazy event:

Two drunken tourists are accused of stealing a Disney World golf cart and taking it for a joy ride. Like so many stories like this, the law-breakers weren’t so smart – they drove right by a sheriff and were busted.

Michael Kulesza of Massachusetts (age 38) and Donald Rossi of New York (age 33) – I guess they should know better by that age – are accused of stealing the golf cart worth $6,500. They took their newly acquired hot rod for a high speed ride (high speed for golf carts, anyway) around Disney’s Boardwalk. Other tourists had to jump out of the way, and the pair almost flipped the golf cart over at one point in their ride (source).

What do you think about these crazy events?