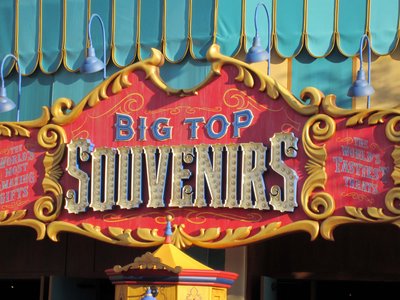 When Disney originally planned to rework Fantasyland, there were no plans to keep the huge merchandise location that was under a big circus tent, which was at that time called County Bounty. But that changed when Tom Staggs, who was the top financial person at Disney, took over as the head of Disney Parks.

You see, Tom knew something about money, and he understood that the huge, former Toontown Fair merchandise location was the second busiest in the Magic Kingdom – just behind the Emporium on Main Street USA.

So today, instead of more Disney Fairies in the New Fantasyland, we have Storybook Circus and Big Top Souvenirs. Some of you like to see more Fairies in the Magic Kingdom, but Disney has done an incredible job with the Storybook Circus area, and Big Top Souvenirs is a truly great merchandise shop. It has a great theme with nice details. The merchandise is a mix of standard Disney character stuff, but also adds in some nice items specific to Storybook Circus. And there is even a place to get some delicious treats – some made in a display kitchen where Cast Members create the treats before your very eyes, like on Main Street.