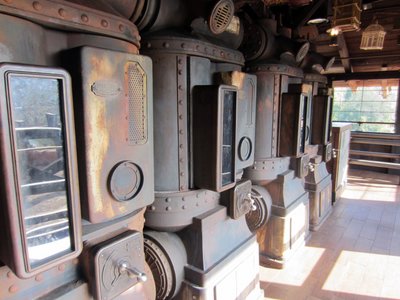 The new elements of the Big Thunder Mountain interactive queue have been installed for some time, but now they are working – kinda.

There are at least four different types of interactive elements: triggering explosions, watching images of people in the mine shafts, spinning wheels to see old-time animations, and getting a burst of air from the Autocanary and seeing an animated bird.

When I visited Big Thunder, there was a long wait time posted for the standby queue – 60 minutes. Many people were going through the stand by line. I’m not sure if it was just a busy day (likely), or maybe folks heard about the new queue elements and wanted to check them out (less likely – I know not everyone is a die-hard Disney fan and thoroughly interested in such things).

Here are notes on my experience, and what I saw happening with others around me for the various interactive items:

The idea is that you spin a crank to charge the explosion, and then move ahead in line to push down on a plunger to trigger the explosion itself. It is all outlined in a five step set of instructions (photo below). But in my experience nobody read the instructions (I don’t think that people waiting in a moving queue should be expected to do so). So there were very few “that’s cool” type of comments – because I don’t think most people were doing things ‘correctly’ to get the resulting explosion. The theme is terrific, the idea is great – but I think it got lost in the translation.

Images In The Mine Shafts

Before getting the line for the attraction, I had seen a short movie by Disney Imagineering of what was supposed happening in the mine shaft. Disney showed the filming of the movies to be seen when bending down and looking into the mine shaft viewer. But my experience was that, again, most people didn’t understand what they were supposed to do. They didn’t know they were supposed to bend down (the viewers are low), look in the viewer, and wait until something happened. They simply walked by.

I think that this was one of the better executed items, but it still was not perfect. Many people walking by naturally understood that they were supposed to turn the crank, and that something should happen. Lots of people were trying it. Many discovered that turning the crank caused an old-time animation to play on the spinning wheel of a charging buffalo or a bucking donkey. People were enjoying this. But many made comments that ‘it wasn’t working’ because, well, the operation seemed inconsistent (or again, many we weren’t following the instruction that we didn’t really know about). When it did work, people enjoyed the effect. People could also see across the room when other people were successful in triggering the animation, which I think encouraged people to keep trying.

Like the spinning wheels for the explosion, the Autocanary was another situation where people were trying to spin the crank, when in fact they needed to pull and hold it to get a puff of air from the shafts and possibly see an animated bird. When the bird animation showed up, it was short but fun. Most people missed the effect because they weren’t using the crank correctly, or weren’t patient for the time lag between using the crank and seeing the animation.

First I have to say that I’m not one of those Disney fans who loves to complain about everything Disney does. I think that Disney generally does a terrific job. After all, they bring together storytelling, engineering, and creativity in a way that nobody else does. And they invent it all from the ground up – you can’t just go to the local Walmart and order up an interactive queue.

But in this circumstance, I think Disney still needs to do some adjusting. Unlike the interactive video game queue in Space Mountain, which people can naturally figure out given their familiarity with video games in general, the new interactive queue at Big Thunder Mountain seemed to escape most people – including me. In my humble opinion the methods of interacting need to be more straightforward, and the results need to be easier, more intuitive to achieve, and more directly tied to the actions you take. Especially when you have about 5 seconds to figure each effect out before the line moves forward.

Perhaps Disney wants there to be some effort involved to activating the effects, so that you need to exert some effort to get the reward. They may also think that adding some complexity will help with repeatability. But in my experience, it seemed plenty of folks were just walking along with comments like “it’s not working” or “I don’t get it”.

Hopefully Disney will take a second look at these effects. With a little simplification I think these effects could be really entertaining.

What do you think about the Big Thunder Mountain interactive queue?