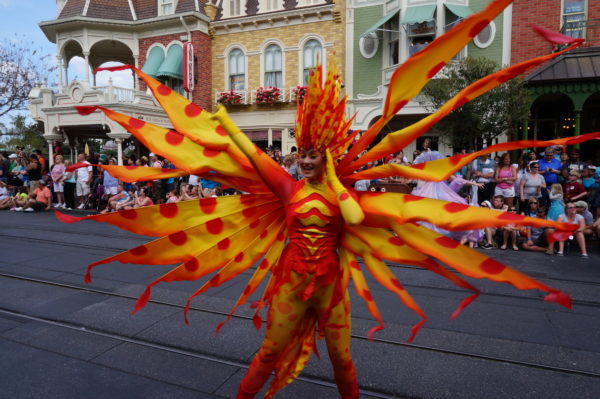 Festival of Fantasy Parade - Little Mermaid Under the Sea

The Best Shows in Disney World

Shows have been part of the theme park industry long before Walt Disney even built his first park. They’ve traditionally involved singing, dancing, fun tricks, or fireworks. Disney has all of these and more.

Touring Plans surveyed thousands of people and narrowed it down to the six highest rated shows in Disney World.

IllumiNations is Epcot‘s nighttime spectacular complete with fireworks, lasers, water fountains, and fire effects to make one of the most amazing visual productions you’ll ever see. Besides that, it also has a very powerful story of Chaos, Order, and Meaning.

The show starts with torches being lit around the World Showcase lagoon and a welcome. As soon as the greeting is over, the flames are “blown out” and the lighting is dimmed.

The show proceeds with a chaotic depiction of the creation of planet Earth. Fireworks explode and the inferno barge burns hot and bright. Eventually, things start to come together as the inferno barge’s flames lower and the massive steel globe appears. This section represents order as counties, famous landmarks, and people are projected onto the globe. The country pavilions (with the exception of Morocco for religious regions and Norway for symmetry) light up and lasers and spot lights light up the sky.

The show ends with the well-known song “We Go On” as the torches are relit and the globe opens to reveal a single torch representing unity in the world. The finale includes an amazing display of bright white fireworks that almost turn night to day.

Finally, the post show announcement thanks you for watching and wishes you and yours a good night. The song Promise then Tapestry of Nations plays as the park clears out. As you’re exiting through the main entrance, you’ll see that Spaceship Earth is projected with the continents and appears to be a spinning globe.

Perhaps the reason this show is so popular is because there is no intellectual property or brand to be sold. It’s just a good, if somewhat abstract, story with an amazing visual display – together with a very catchy soundtrack.

Star Wars has taken Disney’s Hollywood Studios by storm in recent years. Sure, it’s been there for a while with Star Tours, but as the Star Wars: Galaxy’s Edge land is getting closer and closer to reality, Star Wars has permeated almost every part of the park.

Star Wars: Galactic Spectacular is a relatively new show to Disney World, but it has earned popularity mostly for its amazing use of projection mapping on the Chinese Theater (formerly The Great Movie Ride and now being transformed to Mickey’s Runaway Railway). The show includes nods to every Star Wars movie and to the most popular characters including Darth Vader, Kylo Ren, Luke Skywalker, Yoda, Obi-Wan Kenobi, Han Solo, and Princess Leia.

If you like Star Wars, you’ll love this show with it’s new technology and up-to-date movie references.

Festival of Fantasy is the first parade on our list. It is currently Magic Kingdom‘s three o’clock parade and is one of Disney’s highest rated parades ever. It has detailed floats, amazing costumes, and some of our most favorite Disney characters of all time.

The floats are designed as the characters on the float would create them, and the walking characters interact with guests on the street making it even more fun. The best float in the whole parade, though, is the Maleficent dragon float that breathes fire!

What’s more, the soundtrack for the parade includes some of the best songs in the Disney library from the beloved movies The Little Mermaid, Tangled, and Brave to name a few.

It’s really no surprise that guests rated Festival of Fantasy so high.

Fantasmic! at Disney’s Hollywood Studios is theatrics at its best. The show takes place in Hollywood Hills Amphitheater, which was built specifically for this show. It’s a classic story of good versus evil, and (spoiler alert) Mickey is the hero! Throughout the story, we see some of our favorite Disney characters like The Lion King, Fantasia, Dumbo, Snow White, Alice in Wonderland, Hercules, Pinocchio, Aladdin, Mulan, Cinderella, Princess and the Frog, Tangled, Frozen, Bambi, Beauty and the Beast, The Little Mermaid, and Pocahontas.

Fantasmic! is a very unique show among shows at Disney World. It has a complicated story, is set in an amphitheater, and it is almost exclusively dedicated to classic Disney characters. It’s also probably the only show in Disney World that references Steamboat Willie. There’s really nothing to dislike about Fantasmic!

If you think the projection mapping of Star Wars: A Galactic Spectacular is impressive, you haven’t seen Happily Ever After yet.

It’s Magic Kingdom’s replacement for the long running Wishes Nighttime Spectacular, and it is specifically created for Cinderella Castle, which means that, where Chinese Theater is basically a movie screen, Cinderella Castle almost comes to life filling every nook and every window with amazing animation! The castle itself disappears as the projection takes over.

One thing I really like about this show is that it integrates characters that some may consider outdated like Quasimodo from The Hunchback of Notre Dame with new characters from Princess and the Frog, Ratatouille, Wreck-it Ralph, and Zootopia. It also incorporates many of Disney’s greatest hit songs like “You’ll be in my heart” from Tarzan, and “You’ve got a friend in me” from Toy Story.

As if that wasn’t enough, the show also has fireworks! We already know that Disney does fireworks really well, but combining amazing fireworks with the quality of Disney Imagineering takes this show over the top.

1. Festival of the Lion King

The Festival of the Lion King takes place in Harambe in Disney’s Animal Kingdom. The Lion King movie is part of the renaissance of Disney animation along with Beauty and the Beast and Aladdin, all of which have some of the best music Disney ever made.

Festival of the Lion King takes advantage of these amazing songs, many of which were nominated for Best Original Song, and combines them with acrobatics, fire dancing, and performers dressed in authentic African attire. Plus, the performers encourage audience participation especially for the children.

This show is full of pageantry, culture, and classic Disney. It really doesn’t get any better than that, which is probably why it’s the highest rated show at Disney World.

What is your favorite Disney World show?