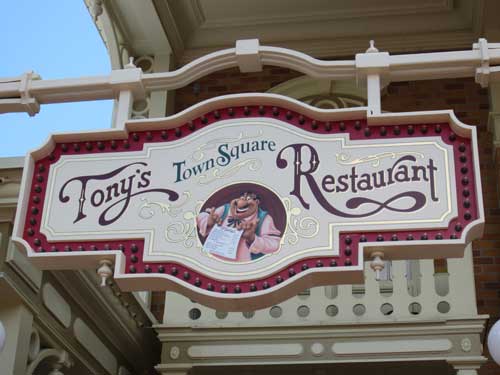 Dining in Disney World is as important to some people as visiting the attractions. From the huge variety to the unique dishes you can’t find anywhere else, Disney does food right.

I don’t know about you, but when I’m on vacation, I like to indulge. One of my favorite indulgences is Italian food. It feels like home, and there’s something comforting about a bowl of pasta or a thin crust pizza.

There are many places in Disney World to get Italian food, but here are my favorites!

Tony’s Town Square is in Magic Kingdom‘s Town Square and is a table-service dining location. With indoor and outdoor patio seating, this is a great place to watch the Festival of Fantasy parade or any other parade that makes its way down Main Street USA.

Tony’s has other Italian-inspired dishes, but the best way to embrace the theme of the restaurant is to choose the spaghetti. While you’re sitting on the patio enjoying your spaghetti and giant meatballs, don’t be surprised if you feel a little like Lady and the Tramp. After all, the movie inspired this restaurant!

Portobello in Disney Springs’ The Landing section is a table-service restaurant serving up classic, rustic Italian food in a relaxed atmosphere. Although this restaurant has received some criticism, it has been re-themed with a new menu created by award-winning chefs, and the reputation is improving.

The antipasti platter is very popular as is the wood-burning oven pizza and rigatoni calabrese. Other options include chicken cacciatore and homemade artisan lasagna. Don’t forget to save room for the Chocolate Paradiso, a rich chocolate cake with chocolate ganache and toffee crunch.

Mama Melrose came to Hollywood to become an actress, but her delicious Italian food became the real star. Now, she serves her famous food on the Streets of America in Disney’s Hollywood Studios and combines her Italian heritage with her new home in Hollywood, California… so the story goes.

Tutto Italia in World Showcase’s Italy pavilion serves some of the best Italian cuisine in Disney World, but it is also some of the most expensive. If you’re willing to splurge, the trade-off is worth it! This table-service restaurant has a menu created by award-winning chef and California restaurateur, Joachim Splichal with selections including grand antipasto misto, lasagna al forno, spaghetti, cannoli, and gelato. If you’re concerned about cost, consider pairing a couple appetizers.

The dining room has an old-world charm, and the enclosed sunroom feels bright and open. You’ll love the views of “Italy” from the patio!

Via Napoli in Epcot‘s World Showcase is said to have the most authentic Neapolitan pizza anywhere outside of Italy. To achieve this authenticity, Disney imports water from Pennsylvania, which has a similar acidity to the water in Naples, Italy. Florida water isn’t good for the pizza because it’s too salty. The pizza is cooked in giant wood-fired ovens, named Vesuvio, Etna and Stromboli after Italy’s three active volcanoes, and is large enough to share. Beware though, if you’re on the Disney Dining Plan, each diner will be charged one credit even if you’re sharing a pizza. This restaurant has more than just pizza, though. Try their soup, salad, pasta, and meat dishes.

Via Napoli is also beautiful. The high ceilings make me feel like I’m in the light, airy Italian Countryside, and the frescos represent Italian art and architecture nicely. I’ve also had some enjoyable conversations with the wait staff since most of them are from Italy!

Do you enjoy the Italian restaurants in Disney World?