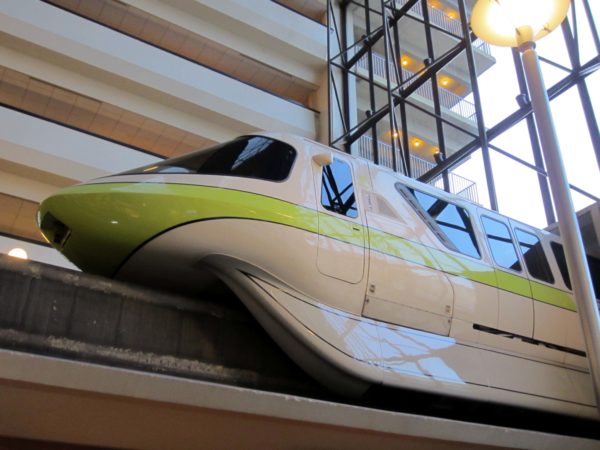 From the simple icons of Value Resort Hotels to the elaborate decor of Deluxe Villa Resorts, each of the Disney resort hotels has a specific theme carried throughout the resort. They’re all a sight to see, but today we’re going to take a look at the top six hotel lobbies in Disney World.

Chef Mickey’s character dining serves breakfast, brunch, and dinner with some of your favorite Disney characters.

Disney’s Contemporary Resort is also the only resort that the monorail actually goes straight through. As you relax in the huge lobby, you can marvel at the monorail as it soars overhead. That alone makes this resort one of the most unique on property!

Disney’s Art of Animation Resort features some of the best animated feature films that Disney has ever created. The hotel rooms are based on The Lion King and The Little Mermaid, a Cars-themed Cozy Cone pool, and the largest pool on property, The Big Blue Pool, with a Finding Nemo theme.

Before you see any of this though, you’ll walk through the lobby full of incredible art work from Disney animators. Look up: the chandelier in the lobby is made up of dozens of sketches of Disney characters. The walls also have black and white and backlit color sketches from Disney movies.

Disney’s Grand Floridian Resort and Spa is Disney World’s flagship hotel. It’s situated on the shores of the Seven Seas lagoon, across from Magic Kingdom.

The Victorian Theme makes this high-end hotel feel very chic and sophisticated, and the five-story lobby is (wait for it) grand. Complete with huge chandeliers, a bird cage elevator, and occasional live music by an orchestra, there’s a lot to see and enjoy here.

If that doesn’t impress you, stop by during a holiday. The Grand Floridian goes all out! At Christmastime, the Disney Culinary team works for hours on end to create a life-sized gingerbread house that makes the place smell delicious. For Easter, the pastry team spends months creating huge chocolate Easter Eggs with impressive designs. This is not a lobby to miss!

The lobby, called the Great Ceremonial House brings, the best of the tropics inside with tropical plants, tiles that give the illusion of water, and beachy glass balls hanging from the glass ceiling with macraméd twine.

Located upstairs is the famous Kona Island, home of the famous Tonga Toast, as well as ‘Ohana where The Best Friends Breakfast takes place. There’s also a monorail stop accessible from the second floor.

Outside, you’ll find white sand beaches, hammocks, and an excellent place to see not only the Electric Water Pageant but also Happily Ever After, Magic Kingdom’s nightly fireworks show.

Disney’s Animal Kingdom Lodge is the only resort in the area of Disney’s Animal Kingdom, and the theme of the resort directly ties into the theme park. There’s even a savanna outside with live animals roaming freely. This is probably the most impressive part of the lobby. You can view the savanna from a floor to ceiling glass wall.

Inside, you’ll find dark wood with stained glass inlays and a variety of authentic artwork and artifacts straight from Africa. Boma – Flavors of Africa, is also located in the hotel’s main building. This table-service restaurant is consistently rated one of the best on property.

Disney’s Wilderness Lodge is located on the shore of Bay Lake, which is also adjacent to Magic Kingdom. This lodge wins the top spot on the list because it transports you to the beautiful lodges of the National Parks.

It’s full of naturally sourced logs for the totem poles, comfortable Adirondack chairs, and beautiful chandeliers made from authentic rawhide and metal. Perhaps the best complement of the lobby is the 82-foot tall crackling fireplace. There’s also a man-made “natural” spring that runs right through the lobby out to the pool.

This resort has some of the top-rated dining on property including Whispering Canyon Café, Artist Point, and Roaring Fork.

Which Disney resort lobby is your favorite?