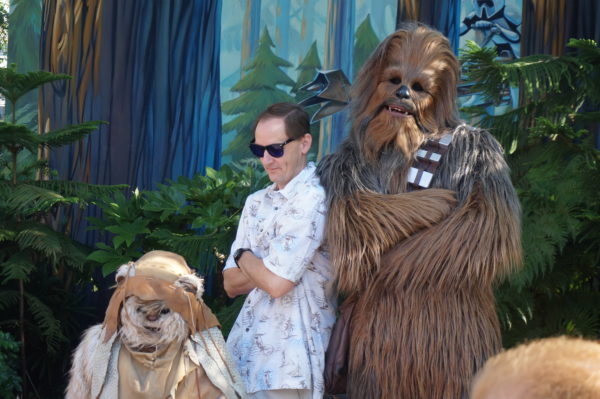 For many Disney fans, the character meet and greets are a highlight of any Disney World vacation. There are many meet and greet options, and it would be nearly impossible to experience all of them.

Characters and locations can change over time, but if you’re trying to decide which ones are essential, start with this list.

Goofy is part of the Disney classic characters commonly referred to as the Fab 5 (Mickey Mouse, Minnie Mouse, Pluto, Goofy, and Donald Duck). The other characters are great, but Goofy is very entertaining, and his line isn’t usually very long.

Goofy is a masked character, which means he doesn’t talk. These meet and greets can be awkward because Goofy can only mime, so you’re doing all the talking. Goofy is a great classic character because he’s, well, goofy! He’s fun, animated, and he loves to pose for pictures.

Goofy can be found at Pete’s Silly Sideshow in Magic Kingdom‘s Fantasyland, at Dinoland USA in Disney’s Animal Kingdom, and occasionally at the Character Spot in Epcot plus several character dining meals like Chef Mickey’s at Disney’s Contemporary Resort where he joins the other four classic characters.

A couple years ago, I would have put Anna and Elsa in this category, but Moana has taken over. The story is excellent, the music is catchy, and Moana is a lot of fun.

She may be Disney’s newest princess, but she’s made a big splash- pun intended. Her meet and greets are typically full of funny jokes and some hula dancing lessons.

However, it’s not easy to find Moana right now. She used to meet guests at Disney’s Hollywood Studios, but she’s only available at special hard-ticket events like Mickey’s Not So Scary Halloween Party, and Mickey’s Very Merry Christmas Party.

Disney Princesses get a lot of hype, but Disney actually has a lot of Disney Princes who are relevant and worthy in their own right. Aladdin is a lowly, homeless peasant of Agrabah when he catches the eye of Jasmine, the princess.

Aladdin has some incredible and adventurous stories to tell, and he’d love to hear about yours! He is occasionally part of the Character Palooza at Epcot, which isn’t listed on any times guides or maps, but he meets guests every day in Adventureland near his Magic Carpet ride.

Disney has created some incredible villainous characters as a foil to all of the good ones. Some of the best villains are Anastasia and Drizella, Cinderella’s Ugly Stepsisters. They cause quite a ruckus wherever they go, but they’re also a lot of fun through their loud taunting of each other and providing gossip to you. They might even offer some dating advice. When it’s all done, they’ll give you some really memorable photographs (warning to little boys: they wear lots of lipstick for a reason).

The sisters don’t meet guests daily, but they are available irregularly in Fantasyland. They also appear with their mother, Cinderella’s evil stepmother, at 1900 Park Fare at Disney’s Grand Floridian Resort and Spa. She may not be very nice, but she’s just as entertaining.

Another classic character type in Disney’s movies is the sidekick. Many of the hero characters have them, but I think Tinker Bell is the best. She’s small, but she has sass the size of Gaston.

To meet Tinker Bell, you’ll have to travel through a portal from Magic Kingdom’s Town Square Theater to Pixie Hallow. This may seem trite, but it’s actually pretty cool especially from the child’s perspective. You can also get a FastPass+ for this character meet and greet. She’s pretty popular, so this will shorten your wait time.

Chewy has always been one of my favorite Star Wars characters. He’s huge and his personality is fun and larger than life! With all of this, he gives really great hugs!

You can meet Chewbacca at the Star Wars Launch Bay at Disney’s Hollywood Studios’ soon to be Star Wars: Galaxy’s Edge.

Any of the ducks from Ducktales are pretty difficult to find as are several other characters. Disney just doesn’t have room for all of their characters to make appearances regularly. Launchpad McQuack is one such character. He appeared in both Ducktales and Darkwing Duck.

The Character Palooza events, mentioned above, are good places to find rare characters. These events are “surprise” meet and greets and Disney just throws together whatever characters they can round up for the time. It kind of ruins the theming of the characters, but it’s still a lot of fun!

Rare characters like Launchpad McQuack can also be found at hard-ticketed events like Mickey’s Very Merry Christmas Party and Mickey’s Not So Scary Halloween Party or through exclusive events like those for Disney Vacation Club Members.

What is your favorite Disney World character meet and greet?