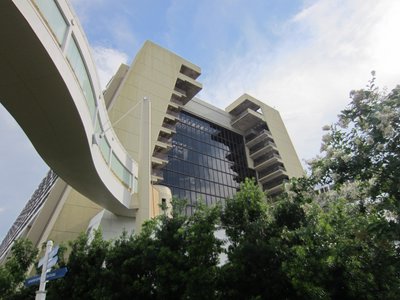 We all have different priorities when selecting hotels.  Some want luxury, and don’t have to worry about price.  Other need the lowest cost, no matter.  But some are bargain hunters – they want the biggest bang for the buck (whether it is big bucks or little bucks).

For many people, staying at one of the Disney resort hotels will be a good choice for convenience.  However, it may not be the best bargain.  Let’s look at some other options.

For many vacationers, getting the best bargains is the number one priority when booking a room. They know that most of their entertainment is going to take place at Walt Disney World and that at night everyone will be so bushed that all they’ll care about is having a clean place to sleep and they don’t necessarily want to spring for expensive Disney hotels.

For all those budget-minded shoppers, we’ve compiled the top ten establishments in terms of value. In order to make the list, however, the hotels couldn’t only be good deals, but had to really give a lot of bang for the buck. Only one hotel out of the top ten is a Disney resort, owing to the fact that the price point on these resorts is just a bit too high to make the rooms worth the extra cost.

So, if twenty-four hours of Disney-level entertainment isn’t completely required, this list can serve as a helpful reference:

Topping the list is the Monumental Hotel, whose architecture merits its epic moniker. On International Drive, mere minutes away from the attractions of Orlando, not to mention shopping destinations, the bulk of which are to be found on International Drive (the Orlando Premium Outlets are five minutes away). At the same time it’s far enough away from the epicenter for guests to profit from some peace and calm. Other sought-after theme parks such as Sea World and Aquatica can be reached by a six-minute drive. Business travelers will be glad to know that the Orlando Convention Center is within reach, at about a nine-minute drive. The hotel also boasts a beautiful pool, Jacuzzi and cabanas. The Monumental has not spent millions on its website, a savings that’s passed on to guests.

Bringing up the rear at number ten is the Continental Plaza Hotel Kissimmee, with all the charm of a roadside hotel in Anytown, U.S.A. Its location could be better as well, standing as it does out on Highway 192, which readers will note none of the hotels in our top 10 list below are located on. Still, the hotel has nothing objectionable at all, and enjoys a fairly high satisfaction rating from Americans as well as internationals on various internet travel websites. Again, if the aim is simply to enjoy forty winks at the end of a Disney day, the budget-minded could do much worse than this lodging.

By contrast, some guests are most interested in getting the highest quality they can, and hang the cost. Many people plan to spend a day or two outside of the World relaxing at their hotel’s spa, dining at the restaurant, using the gym, or simply doing nothing at all. For all those travelers who place the emphasis on what happens outside of Disney World, we’ve compiled a list of the top ten choices.  Remember, bargain here means “bang for the buck”, not just “few bucks”.

The Omni Orlando Resort at Champions Gate is a champ among hotels. Accommodations here are lavish and sumptuous, right down to the plush robes provided; specialty villas are even available. An infinity pool, waterslides, private inner tubing river and private, rentable cabanas grace the hotel’s grounds. The Omni also headquarters the David Leadbetter Golf academy. Mr. Leadbetter is a PGA Master Professional and the world’s premier golf instructor, having coached innumerable PGA tours. For those who only take golf semi-seriously, the Omni also boasts Champions 9 Golf, an onsite lighted putt-putt course. The Omni lives up to its name by having something to please every taste, including an enormous and complete European spa. Rooms can be had for under $200 a night, especially in the off-season when availability is high.

The JW Marriott Orlando Grande Lakes, the sister hotel to the Ritz-Carlton Orlando Grande Lakes, is a sight to behold. It brings up the rear on our top ten properties list mainly due to its room quality, which is just barely below the other nine ahead of it. Their deluxe rooms are 420 square feet of sheer magic, with lakefront views.  This resort also has a sprawling Greg Norman golf course, the expansive grounds of the Grande Lakes resort, a beautifully-maintained lazy river, world-class spa, and incredible dining opportunities. The JW brand is near the top of the Marriott food chain, so you know you will also get great service. too.  Basic rooms are available at under $300 per night, but for families there are also some great deals available on adjoining rooms and amenities packages for under $450 per night, so booking in advance is highly recommended.