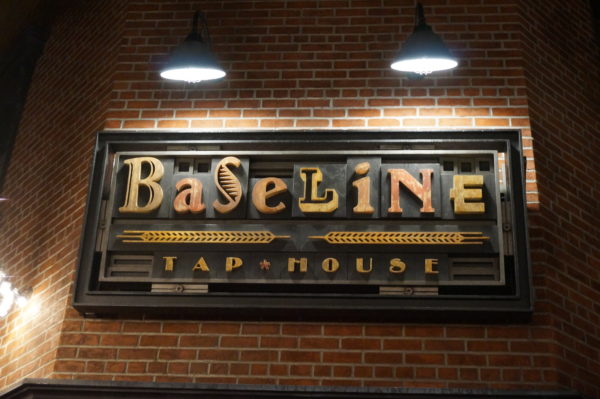 Walt wanted his parks to be dry. However, all of the parks now serve alcohol, and Epcot even sells adult beverages from stands set up all around the park including on the promenade around World Showcase.

Today we’re going to take a look at the best beers in Disney World.  Yes, seriously.  Disney sells many unique and unusual beers from all around the world and even some from local breweries.

Several new restaurants have opened recently in Disney Springs as the whole area has been rethemed in the past few years.

Morimoto Asia opened in 2015 with Chef Masaharu Morimoto, world-renowned chef, at the helm. The food here is delicious, and the atmosphere is amazing, but today we’re talking beer.

Try the Sakura Kolsch or the Cherry Blossom Kolsch by Crooked Can Brewing Co., which is a collaboration between the chef and the brewery. Both are dry hopped with cherry blossom tea and pair well with any of Morimoto’s dishes. Another great choice here is the Morimoto Soba Ale, which is part of Chef Morimoto’s Signature Series of Rogue Ales. The roasted soba gives it a nutty finish that is both light and refreshing.

The Edison restaurant has a really cool electrical and industrial feel, and it even turns into a period restaurant at night. A special restaurant requires special drinks, and the Cantillion fits the bill. This Belgian brew is one of the most highly coveted beers in the world. Why? Because it’s brewed only five months out of the year in the cool months of fall and spring when the wild yeast floats in through the open windows.

Maria and Enzo’s is new restaurant with an Italian theme, specifically that of Parma, Italy. Birra Frangante, translated as “fragrant beer” brewed by Birrificio Del Ducato is a Belgian pale ale but with aroma and fragrance than typical brews of this style. Adjacent to the restaurant is Enzo’s Hideaway, a speakeasy bar. One of the best beers here is the Goose Island Bourbon County Stout that is barrel aged. Flavors include chocolate, vanilla, and roasted barley.

Disney’s Animal Kingdom is a unique combination of reflecting real life and imagination, especially with Pandora- The World of Avatar.

Satu’li Canteen in Pandora serves mostly a bowl menu, but their drinks are just as unique. Mo’ara High Country Ale is a Pandoran brew with herbal spice hops and notes of caramel, toffee, and nuts. Satu’li also serves Hawkes’ Grog Ale aptly named given the golden ale’s green color. This light beer is brewed by Terrapin Beer Co., from Athens, Georgia, and has a citrusy wheat flavor with a creamy finish.

Kungaloosh Spice Excursion Ale is an African-inspired deep amber ale that is brewed only for Walt Disney World. The recipe includes sorghum and a special blend of spices like cardamom and cinnamon. It can be found in many places in the park including Nomad Lounge and Tiffins in Discovery Island and Thirsty River Bar and Trek Snacks in Asia.

Also in Asia is Yak and Yeti Restaurant where you’ll find Lucky Buddha. This crisp, clean, refreshing beer is served in a green bottle sculpted with a laughing Buddha. Yak and Yeti can be found at the base of Expedition Everest, so be sure to stop by after your journey up (and down) the mountain!

Over in Africa, stop by the Dawa Bar and pick up a Safari Amber, which is brewed exclusively for Disney World. This refreshing beer has a subtle citrus taste and is a great way to cool off on a hot day.

Epcot is known of their plethora of available adult beverages, but there are some that are better than others.

I  recommend making Advanced Dining Reservations at Le Cellier in the Canada Pavilion of World Showcase. They have some of the most delicious steaks you’ll find, and their Canadian Cheddar Cheese Soup and Oatmeal Stout Braised Short Ribs are fan favorites. A beer that pairs very well with all of these is the Unibroue Blanche de Chambly, which is the first beer that Unibroue brewed with white ale.

During the International Flower and Garden Festival, stop by Florida Fresh for the Monarch Milk Stout by First Magnitude Brewing Co. from Gainesville, Florida. It’s smooth, sweet, and like a creamer in your morning coffee.

Also at the Flower and Garden Festival, check out the Violet Lemonade Ale at Pineapple Promenade. Playalinda Brewing Company, out of Titusville, Florida, created the perfect blend of sweet and sour flavors.

Another great Flower and Garden beverage is the Sunshine Greetings Orange Hibiscus Wheat Ale. The light pink hue, floral aroma, and light, fruity flavor plus a subtle sweetness make this drink complex but easy to drink and enjoy.

Disney’s Hollywood Studios a fun park because of the thrill rides, California theme, and available food and drinks.

BaseLine Tap House opened its doors in late 2017 on the new Grand Avenue, with a downtown LA theme. The pub boasts a huge variety of craft beers, and they even say their beer flights can be made into 126 possible combinations! Here are a couple I suggest. Golden Road Hefewizen is a Bavarian-style wheat beer made with German yeast and notes of clove and banana. It’s a medium body beer with a crisp finish. Stone Delicious IPA is a citrus option with a hint of bitter lemon candy flavor, which is balanced with the hop spice.

The 50s Prime Time Café in Echo Lake has been a staple in the studios for many years. The home cooking here can’t be beat.  I also suggest the Full Sail Session Lager, which is a smooth import-style beer made in the good old US of A. The look and taste pays tribute to the pre-Prohibition days and fits well with the theme of the Prime Time Café.

Beer in Disney World:  your favorite?