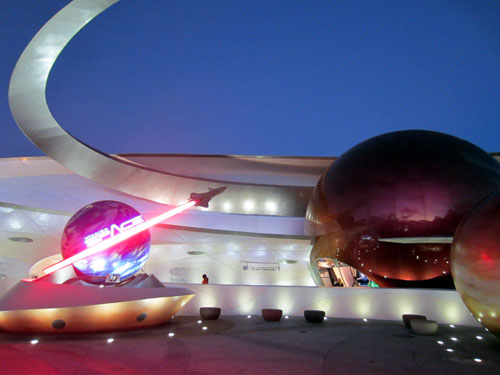 You might have even visited Disneyland and Hollywood in California. How would you feel if I told you that you could now go to the very mysterious… Disney World!?

Disney has long tried to make their resort a one stop shop providing world-class attractions, five star dining, dinner shows, the best resorts, and unique shopping.  The idea was to keep guests on Disney property, spending their money only on Disney items.  Now, however, Disney has decided to buck the that strategy – at least a little bit – by encouraging guests to stay at Disney World and go off property to find additional entertainment!

Adventures By Disney (ABD) will offer exclusive experiences in and around Kissimmee-St. Cloud including the Kennedy Space Center and an Osceola County excursion.

If you choose the Kennedy Space Center excursion, you’ll live like an astronaut for the day. You’ll spend the day with a real astronaut then dine on the Launch Complex 39 (LC-39), which is an exclusive opportunity only for ABD guests.

Wouldn’t it be awesome to ride Epcot‘s Mission: Space and feel like an astronaut – but then also spend the day at the site where real spaceships are actually launched?!

The Osceola County excursion is a little less site-specific, but guests get to enjoy the best of the county.

You’ll start by kayaking down Shingle Creek, a protected wetlands area (the nice term for swamp) considered the northernmost tributary of the Everglades, or by riding an airboat on Lake Tohopekaliga (Lake Toho for short), the largest lake in the county. Then you’ll head over to Forever Florida, an exciting ranch-like camp with horseback riding, zip lining, and an eco-tour.

It’s like a real-life Soarin‘ Around the World adventure!

As promised, Walt Disney World Resort gets in on the action too!

Magic Kingdom will offer a tour guided by a real Imagineer. Guests can also enjoy a special meal at Disney’s Contemporary Resort Hotel, a private safari at Disney’s Animal Kingdom or a Fantasmic Dinner Party at Disney’s Hollywood Studios. You’ll top it all off with FastPasses on steroids: ride the best and newest attractions without any wait at all!

All this VIP service comes at a cost, but it might not be as high as you might think considering everything that you get. This all-inclusive vacation includes transportation between Disney World and all of the off-property locations, luggage service, several meals, and lodging, which is currently slated for Disney’s Polynesian Village Resort.

Disney hopes that this will appeal to those who have visited Disney World several times and want something different. The final cost comes in at $4,939 per person and is one of the more affordable Adventures by Disney opportunities.

When you visit Disney World, do you spend some time off-property?