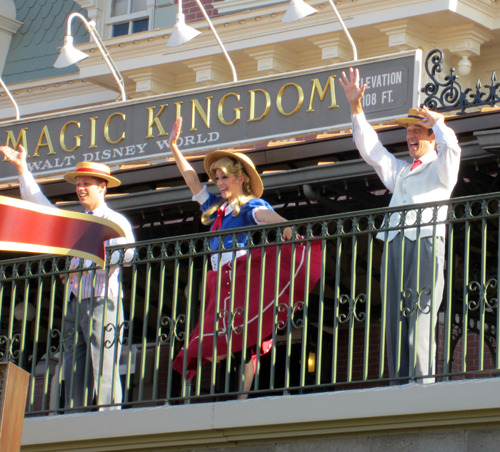 Top Five Benefits of Arriving at a Disney Park Early

The term Rope Drop comes from Cast Members standing at the entrance to each land with a rope blocking the entrance. At park opening, the Cast Members remove the rope and allow guests to enter the area.

All four parks used to participate in a fabulous opening ceremony, but Magic Kingdom is the only one that still puts on a show. Complete with fireworks, costumed characters, and all the pomp and circumstance implied by the term “Opening Ceremony,” guests who arrive early enough will not be disappointed.

2. Take in the details

Usually when we walk around the parks, we are accompanied by thousands of other people. This means it’s usually very difficult to take in all of the details in the parks. For example, did you ever notice the sign at the front of Magic Kingdom that says “Horse-drawn Streetcars. One Way to Cinderella Castle”?

You can also get much better pictures. Imagine a photo in front of Cinderella Castle with no one around but you!

When Walt designed Disney World, he wanted the Main Street USA to feel like a home-town main street. When the stores on Main Street are open, it is difficult to see the details and get the home-town feel Walt intended. However, when the stores are closed (as they are before the park opens), the old-time theming is much more visible.

When you arrive before the park actually opens, you will be allowed in but nothing is open yet. Head right to your favorite attraction, or as close as you can get, and you’ll be able to hop on with no wait. You may even be able to circle around and ride again… and again!

When you arrive early, you’ve already accomplished much more than those who arrive “on time.” You can see and do more in the first few hours than you’ll be able to do all day, and you’ll probably be hungry. Take an early lunch, and avoid the lunch rush!

The crowds at Disney World can get huge in the afternoon especially in the busiest times- usually when kids are out of school. If you’ve accomplished a lot in the morning hours, you can take a mid-day break at your hotel’s pool or even a nap in your room. Head back to the parks later on for Extra Magic Hours and decreased crowds in the late evening hours.

Do you arrive at the Disney parks early?
Leave your comments below.