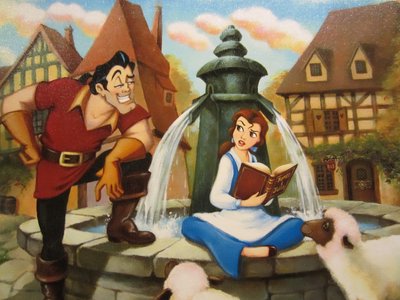 Beauty And The Beast Artwork At Bonjour Gifts

Many folks who visit Disney World enjoy picking up a souvenir or two. Perhaps they get an inexpensive souvenir like a keychain or an antenna topper, or maybe something a bit pricer.

You might be surprised that right in the middle of the Magic Kingdom, you can easily spend hundreds or thousands of dollars on Disney artwork. One shop that sells Disney artwork is Bonjour Gifts in Fantasyland.

Of course the merchandise on sale in Bonjour Gifts focuses on Beauty and the Beast. It has some great stuff, and it should. The movie of Beauty and the Beast was in its own right an impressive work of art and a commercial success. It was the first animated film to reach $100 million in North American sales and is estimated to have earned Disney more than $400 million in ticket sales. It also won numerous awards, ranging from Best Original Score and Best Original Song (for the song titled “Beauty and the Beast”) to a Golden Globe for Best Motion Picture – Musical or Comedy.

So it only makes sense that a movie that received so many awards has also inspired some amazing artwork.

Let’s take a look at some of the Beauty and the Beast artwork you can purchase for your art collection from Bonjour Gifts:

Do you like the Beauty and the Beast art at Bonjour Village Gifts?