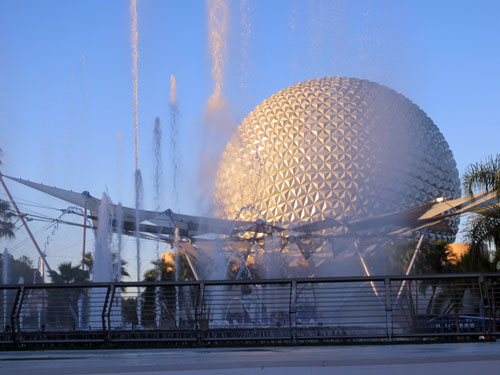 When Epcot opened on October 1, 1982, it was Walt Disney World Resort’s second theme park. It is more than twice the size of its predecessor, Magic Kingdom, mostly because it is really two parks in one.

It started as a concept of Walt Disney himself as a community that would operate as a real-life area with people living and working there. However, when Walt passed away even before Magic Kingdom was finished, the Disney Company decided they didn’t want to take on such a huge project without the guidance of their visionary.

Instead, Epcot opened as a “permanent World’s Fair” with two distinct parts: Future World and World Showcase. Though both worlds are different, they both pay tribute to human achievement, technology, and culture. Future World focuses on technology and nature while World Showcase immerses guests in eleven different country’s cultures.

The Canada Pavilion showcases our friends to the north in all their glory. You can wander through a replica of the Victoria Gardens complete with a beautiful pond and flowers.

Guests will also enjoy visiting perhaps Canada’s most well-known landmark: Niagara Falls. Although it’s not as big as the real thing, you will enjoy the cascading waterfalls and the rock structures.

The courtyards in the Italy pavilion are equal in beauty to Canada’s but showcase a much different culture. While Canada is dedicated mostly to nature, Italy focuses on the classic architecture of the ancient country. Guests can see replicas of St. Mark’s Campanile as well as Neptune Fountain, which is a great spot for a photo op!

Don’t forget to turn around and look out over World Showcase Lagoon. You’ll be gifted with breathtaking views of Future World including Spaceship Earth off in the distance. If you head toward the back of this pavilion, you’ll find Via Napoli, which undeniably has the best pizza in all of Disney World!

Japan is an amazing country, and Disney World did a good job of replicating its beauty in Epcot. From the architecture to the Mitsukoshi Department Store, the Japan pavilion represents the long and fascinating history of Japan.

The Mitsukoshi Department Store, owned by Mitsukoshi Inc. who also sponsors the pavilion, was founded in the late 1600s selling primarily kimonos. It changed how people purchased items; instead of selling door-to-door, Mitsukoshi set up a fixed location where goods could be purchased. Too many guests walk right through this location thinking it is nothing more than a scheme to get visitors to buy souvenirs, but it is so much more than that!

The Tokyo Dining Restaurant in Japan also has a hidden secret. There’s a balcony outside of the restaurant offering awesome views of the World Showcase Lagoon, Spaceship Earth, and Illuminations.

When Disney decided to build World Showcase, they intended for the pavilions to be sponsored by their home countries, much like the pavilions in Future World were sponsored by companies. However, financial times were uncertain, and while Disney thought a pavilion in Epcot would increase tourism, the countries were unsure and reluctant to commit to an expensive ten-year lease.

Morocco is one of only two countries that followed through with this plan.  The King of Morocco sent 19 of the country’s finest artisans to design and build a mosque lighthouse and an authentic Moroccan home among other things. Look for the broken tiles representing the Muslim belief that only Allah can create perfection.

Mexico is one of my favorite places in World Showcase. With two distinct areas, you can enjoy Mexico during the daytime and the evening all day long. Outside, La Cantina quick-service restaurant serves up excellent Mexican food amidst beautiful architecture including a Myan  pyramid in the background.

The monorail is a Disney World icon, and it can be accessed just outside of the entrance of Epcot. Any guest can hop on board and head over to Magic Kingdom or ride the full loop back to Epcot, which is what I suggest. Disney World property is naturally beautiful, but it’s something that not many guests get to see or appreciate.

The Seas pavilion in Future World West housed the largest aquarium in the world when it was built in 1986, but now it is second to the Georgia Aquarium, which was built in 2005. The walls are eight inches thick and hold almost six million gallons of saltwater and over 6,000 sea creatures including dolphins, stingrays, and fish. Look especially for the blue tang, the same species as Dory, and clownfish, which is Nemo’s species.

You’ll find two manatees in their own tank. They’re actually part of a conservation project to rehabilitate injured or orphaned manatees. These gentle sea cows, as they’re commonly known, are massive, but they’re very sweet and friendly making them susceptible to injuries resulting from human interaction. I could sit and watch these guys for hours!

The Land Pavilion is full of interesting things like a dining room that salutes all four seasons and a rotating restaurant.

An overlooked attraction in The Land is the Living with the Land attraction. It’s located on the lower level of the building, and it looks at ways to increase efficiency in our food supply. You can see many different kinds of growing techniques that Disney Scientists are trying out plus familiar and exotic plants. The food grown in Living with the Land is used in the restaurants all around Disney World.

This is the only “ride” on our list, but I believe it fits because this serene boat ride is relaxing and educational.

Fountain of Nations is located behind Spaceship Earth and before you enter World Showcase. It puts on shows several times per hour. The dancing water timed to music is not only an amazing sight, but it also provides a cooling mist that is welcome on hot summer days!

When Fountain of Nations opened in 1982, representatives from 25 nations were invited to bring water from their country to pour into the fountain in a ceremonious opening.

Rounding out our list of the top ten attractions in Epcot is Illuminations. This fireworks and laser show occurs nightly at am estimated cost of $25,000 per show.

The show has three parts: chaos, order, and meaning. Each part involves different effects of the giant metal globe floating in the lagoon coordinated with the fireworks, lasers, and music. The show is touching and sentimental encouraging the audience to recognize the good in life and in everyone we meet. At its core, Illuminations shows the audience that we have a similar background and can live in harmony together. Because if its deep meaning, Illuminations is my top attraction in Epcot!