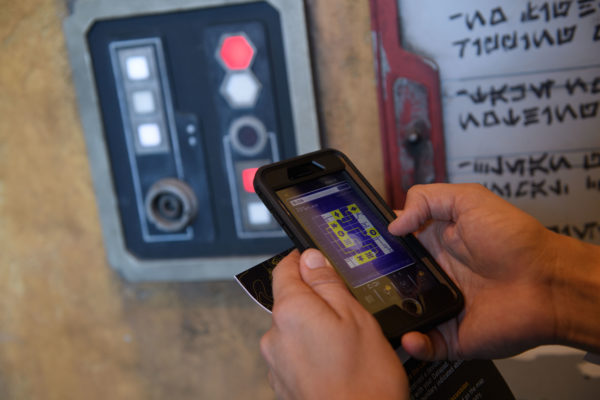 Star Wars: GalaxyÕs Edge is the first land within a Disney park designed to integrate with the Play Disney Parks mobile app, which debuted last year. Guests who choose to use the Play Disney Parks app in Star Wars: GalaxyÕs Edge at Disneyland Park in Anaheim, California, and at Disney's Hollywood Studios in Lake Buena Vista, Florida, will be able to transform it into their very own Star Wars: Datapad. The app provides new opportunities for guests to engage with the land. (Richard Harbaugh/Disney Parks)

Can You Speak Batuu? How To Talk With the Locals When At Star Wars: Galaxy’s Edge

They say, “When in Rome…” Well, when in Batuu, do what the Batuuans do!

Disney says that Star Wars: Galaxy’s Edge will be the most immersive experience we’ve ever seen in a theme park. So, when you get to Batuu, you’re going to need to know some important things like the language!

Today we’re going to learn a little bit about Aurebesh, the written language of Batuu, and some common phrases used by the locals (Cast Members) in Galaxy’s Edge.

Aurebesh is the written language used in Batuu and represents “Galactic Basic” of the Star Wars franchise movies. Aurebesh was originally created by Joe Johnston then standardized by Stephen Crane, art director of West End Games, in the 1990s. After his efforts were successful, LucasFilm requested a copy of the standardized Aurebesh to distribute to other interested parties.

Before Episode VII: The Force Awakens hit theaters in 2015, Google Translate made Aurebesh an option on their site.

You will see Aurebesh carved in stone, written on walls, and as labels on signs all-around Star Wars: Galaxy’s Edge. You can use your MyDisneyExperience app, which transforms into a datapad when you enter the land, to translate signs and writing!

The spoken language in Star Wars: Galaxy’s Edge is Batuuan, which is similar, I’m told, to Galactic Basic language, on which Aurebesh is based. As you’re walking around Batuu and talking to the locals, you might hear some unfamiliar terms. If you happen to say something back to the locals and you say something incorrectly, they might give you strange looks or worse question your allegiance.

To help keep you safe on Batuu, I thought it would be fun to learn some Batuuan sayings that will have you fitting in with the locals!

Greetings on Batuu differ depending on the time of day. In the morning, you would say “Bright suns” (because there are three suns in the Batuu sky), and in the evening, you should say “Rising Moons”.

If you are one of the good guys, you can show your loyalty to The Resistance by saying “Ignite the Spark”. Just be careful who you say this to; the wrong audience might have the First Order out for you! If someone says, “Ignite the Spark”, the proper response is “Light the Fire”. Answering anything else might have The Resistance questioning your loyalty. If you’re really brave, try uttering the wrong greeting, and see what happens!

You might need to know some simple terms to help you get around town. If you need a water fountain, you should ask for a hydrator, which is fed by an audio-animatronic Dianoga beast; if you need a restroom, you’ll ask for the refresher.

To say “thank you”, say “well bartered”.  If you are purchasing something, you will asked for “credits“.

If you’re sharing a drink with a local, saying “under the shadow of the spire” is like saying “cheers”, and to wish someone good luck, say “good run”.

If someone asks you a question and you don’t know the answer, say “Only the ancients know”.

A couple of other terms might be helpful. When you arrive on Batuu, you are “on planet” as opposed to being somewhere else in the park. Humans are called Terrans, and children are referred to as younglings or padawans. A stroller is called a “youngling transport”.

Have you heard the saying of Batuu?  Rising suns!