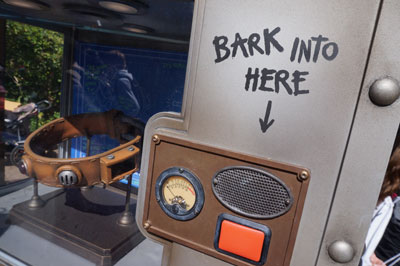 Something unique and wonderful about Disney is that the parks are always changing. New parades. New construction. New food. There is always something new and different to see, even if you visit Disney property frequently.

Another unique and wonderful thing about Disney is how they add interesting touches and entertainment options, big and small, all the time. Nobody will book a vacation to Disney World simply to see the Main Street USA Trolley Show, but those who take a few minutes to watch the show are in for a treat. LIkewise, nobody will visit Disney World just to check out the villainous theming details of a the Villains in Vogue Store at Disney’s Hollywood Studios, but those who check out those detail will leave with a smile on their face.

Today, we will look at something interesting at Disney’s Animal Kingdom that is both a change (it’s new) and is entertaining (trust me, it is).

It’s not a huge, new, multi-million dollar attraction or a staged musical show.

If you saw Disney Pixar’s Up – which was an awesome movie by the way – you might recall Dug. Dug is a golden retriever who belongs to Charles Muntz, the primary mean guy in the movie. While Muntz is mean, he did do something very cool: he invented a special dog collar that can translates a dog’s barks and thoughts into speech. (Remember Dug’s famous line, “Squirrel!”?)

That collar has a name: the Bark-O-Lator – a translator for barks.

Disney has added a machine holding a Bark-O-Lator collar to the queue area of the Dug and Russell Meet-N-Greet on Discovery Island.

The Bark-O-Lator allows you as a guest to press a button, and bark into the machine. The machine magically translates your dog bark into English.

It’s simple, it’s quick, and it’s fun. If you try it, you will leave with a smile on your face just as I did.

If you do get a chance to try out the Bark-O-Lator yourself, be sure to bark loudly. Very loudly. The first few times I tried it, the machine couldn’t hear me, and therefore, it couldn’t translate my barks. A friendly nearby Cast Member, who had apparently seen many-a-guest not bark loudly enough, gave me the tip to bark more loudly. That worked.

I have heard a rumor that Disney might upgrade the Bark-O-Lator in the future to link it to your MagicBand for a more personalized experience.  Wouldn’t that be cool?

Would you like Disney to help you translate your dog’s barks into English?
Leave your comments below.