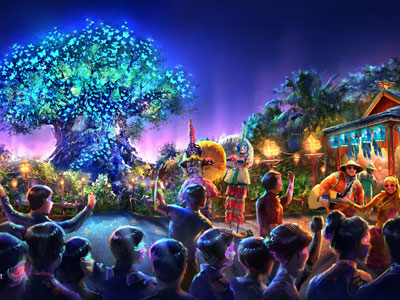 It has been two years since Disney announced the addition of Avatar Land to Disney’s Animal Kingdom way back in 2011.

Since the announcement, Disney has released relatively little information to the public, until now.

At the D23 Expo in Japan, which took place October 12-14, 2013 at the Disneyland Tokyo Resort, Disney announced some additional details and concept art for the planned Avatar Land at Disney’s Animal Kingdom. The new land, which represents the largest expansion ever of the Animal Kingdom Park, is scheduled to open in 2017.

The last major expansion of Animal Kingdom was in 2006, when Disney opened the Expedition Everest roller coaster. That ride cost a reported $100 million.

The new Avatar Land is based on James Cameron’s Avatar movie. It will bring the mythical land of Pandora (from the movie) to life, and will feature floating mountains, glowing forests, and soaring beasts.

By the time the expansion opens in 2017, it will have been eight years since its namesake movie has been released. Does that mean that Disney is building a huge new land for a movie franchise that is already past its prime? Nope. Cameron has plans for a lot more Avatar. In August 2013, James Cameron announced that he will create three additional Avatar movies. The first is set to be released in December 2016.  In addition, Cameron announced a new collaboration with science fiction writer Steven Charles Gould.  Gould will write four stand-alone novels based on expanding on Avatar.  So if Cameron has his way, Avatar will become an entertainment franchise with a long future ahead of it.

Original plans, announced in 2011, called for both the new Avatar movies as well as the Avatar Land in the Animal Kingdom to open between 2014-2015.  There have been delays, and reports are that the relationship between Cameron and Disney Imagineering has been strained. Perhaps the release of this new concept art means that things are moving along better now.

Disney plans to put the Avatar Land between the Africa section and the Oasis section of the park, taking over what is now Camp Minnie-Mickey. Disney is already in the process of building a new home for the perennially popular Festival of the Lion King show. The new theater for the Lion King is under construction in the Africa section of the park, not far from the entrance to the Kilimanjaro Safaris ride.

Disney did not reveal details behind this piece of concept art, but it appears to show a water-based ride through a glowing forest. It is not clear whether this will be an indoor ride, like Pirates Of The Caribbean, or an outdoor experience. Since there is plenty of glowing foliage, I’m betting on an indoor experience.

Disney says we will be able to “discover what it feels like to soar into the sky riding a Banshee.” Will this use the same technology as the popular Soarin ride in The Land at Epcot? Or maybe a completely new ride experience, like the one Disney recently patented?

The Animal Kingdom park was designed for nighttime use from its inception, but has rarely been open late so as not to disturb the schedules of the animals. It looks like that will change.

Disney plans to add new nighttime entertainment in the Discovery Island section of the park. The artwork below shows that the Animal Kingdom centerpiece, the Tree Of Life, will be illuminated at night and turned into the “Mother Tree” from Avatar.

Disney says that “live music, floating lanterns, water screens, and swirling animal imagery all combine to bring a show to Discovery River that will delight our guests, and truly cap off their day at Disney’s Animal Kingdom.” It sounds like Disney will truly make Animal Kingdom a full-day experience.

There is talk of a nighttime version of the Kilimanjaro Safaris, but no word on just how the animals might cooperate with a new nighttime schedule.