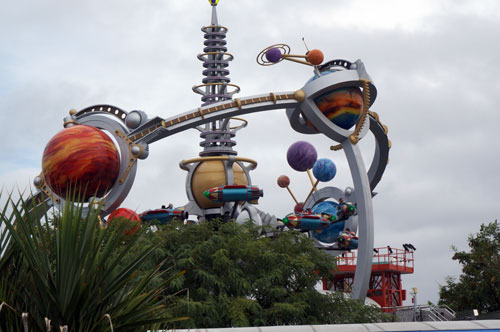 Astro Orbiter is Back and Better than Ever

In May, 2014 Disney announced that the Astro Orbiter would be down for an extensive refurbishment.

Extensive was a good word for it.

Construction crews removed the huge planets as well as all the rocket ships from the classic spinning attraction and made everything look sparkling new. The refurbishment included not only cleaning everything up but also giving the rocket ships themselves a new paint scheme, replacing the former yellow and gold colors with vibrant blues and reds.

Did you know that the Astro Orbiter ships travel about 1.2 million miles a year?

Did you know that you can find a similar rocket ship spinner ride in all five Magic-Kingdom styled theme parks around the world?

Did you also know that the current Astro Orbiter attraction opened way back in 1994? Do you remember what was located on top of the PeopleMover loading platform before the Astro Orbiter? It was the Star Jets, which was a D-ticket attraction that opened in 1974.

Let’s take a look at the new and improved Astro Orbiter: