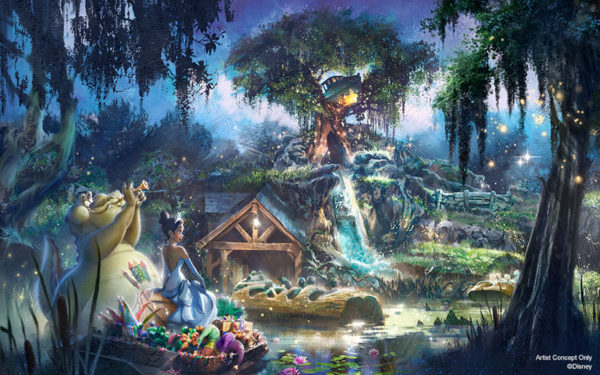 As people know, pretty soon the Splash Mountain we know and love will be closing. Opening in its place will be a Splash Mountain themed after the animated film The Princess and the Frog. This change has been controversial with advocates for the change feeling the Song of the South-themed attraction is outdated and divisive, while opponents for this change feel the attraction is a classic that should not be changed.

One thing people can agree on is that Tiana deserves her own attraction. Well, I say why just an attraction when she can have a whole land?

One land that Disneyland has and Walt Disney World doesn’t is New Orleans Square. In this area of Disneyland, you will find the Haunted Mansion and Pirates of the Caribbean as well as New Orleans style eateries. Other shops in the area include a mint julep bar as well as a parfumerie.

Could Walt Disney World benefit from adding their own New Orleans Square to the Magic Kingdom?

Let’s dream for a few minutes…

Here would have been the optimal place to give Princess Tiana her own attraction. This could have been a race down the bayou to defeat the nefarious Shadow Man. Not only could this have heralded a new attraction but a new sit-down restaurant called Tiana’s Place. This could have been a character breakfast with Tiana and friends in the morning, and a gourmet restaurant in the later parts of the day. To answer the question of what food would be served here why that would be delicious New Orleans Cajun food. This could include Tiana’s delicious family Gumbo as well as Jambalaya, Crawfish, Shrimp and Grits, Beignets, and Étouffée.

So we have a feast for your eyes, a feast for your mouth but how about a feast for your ears. Imagine a Jazz club where musicians (maybe one dressed like Louie) could play several times a day while throwing Mardi Gras beads to the crowd. It would be a party every day! Here you can purchase authentic New Orleans beverages including Sazerac (the official drink of New Orleans), a Hurricane, a Mint Julep, and others.

All great ideas have challenges.  Where could Disney fit these additional buildings between Frontierland and Big Thunder Mountain – perhaps bumping out beyond the railroad tracks and into backstage areas?  Would Big Thunder get disconnected from Frontierland?  Is there money in the budger?

Has Disney missed a grand opportunity? Should the Imagineers have given this more thought? Perhaps somewhere in the future an Imagineer will have an ah-ha moment and give the Magic Kingdom its own New Orleans Square.

Should the Magic Kingdom have a New Orleans Square?