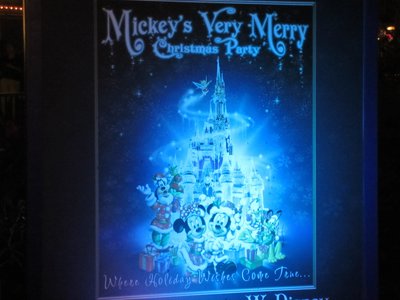 Each year, the Magic Kingdom gets a Christmas makeover with beautiful decorations – especially on Main Street USA. And those decorations set the stage not just for normal park goers but also for a special event that takes place on select nights – Mickey’s Very Merry Christmas Party.

Here are answers to nine important questions about the party.

1 – What Happens At The Party?

A selection of attractions is open during the party – most, but not quite all. Since admission to the party is limited, you can often get to ride many more attractions that you could normally since lines are short and people are entertained with other events. And just what are those other events? They include things like Mickey’s Once Upon A Christmastime parade (which you can see only during the party or during about a week right around Christmas during normal operating hours), a special edition of the Castle fireworks show called Holiday Wishes, dance parties with Disney Characters, and many meet and greet events with Disney Characters.

The party starts at 7:00pm and goes until midnight. In the past Disney has allowed party guests into the park starting at 4:00pm.

Yes. Normal park admission isn’t good enough.  This is called a ‘hard ticketed event’ and you must purchase a ticket for a specific party date. When you enter the park, the Cast Members will put a plastic wrist band on your wrist. This is so that they can tell that you paid for admission to the party, and so that they can help to clear the park of normal day guests who didn’t pay for the party. More on that later.

The parties start in early November and go up until a few days before Christmas. The cost depends on when you go. Tickets for parties early in the season or on weekdays are least expensive. Last minute purchases closest to Christmas are most expensive. The tickets range from about $55 to $70.

5 – How Does Disney Clear The Park For The Party?

I always wondered how Disney could possibly clear the park of people who didn’t pay for the party, whether it is Mickey’s Not So Scary Halloween Party of Mickey’s Very Merry Christmas Party. Here is how it works: Before the party begins, the Magic Kingdom is open to normal day guests. But people who pay for the party get a special wrist band. At the party’s starting time, Cast Members start setting up check points where they ask to see each person’s wrist band. If you don’t have a wrist band, the Cast Member will send you to the exit. That is how they slowly identify and clear out all the party crashers.

6 – What Are the Food Options?

Typically the sit down restaurants, like Tony’s Town Square, are not open during the party. Many quick service restaurants and snack locations are open, from the Main Street Bakery to Pecos Bill Tall Tale Inn and Café, from the Frontierland Turkey Leg Cart to Cosmic Ray’s Starlight Café.

Perhaps the most exciting food option is that Disney offers all-you-care-to-eat hot chocolate, apple juice, and snicker doodle cookies served at selected locations. You only get one serving at a time, but you can go back as many times as you like. And what’s not to like about all you can eat cookies?

Yes, the jolly old man makes an appearance at the party. You might have to wait in line for up to an hour or more, but he holds court near the entrance to the park. Remember that Santa has to scoot to be in the parade, so plan accordingly.

8 – Is There Merchandise Exclusive To The Party?

Yes there is. You can get Christmas merchandise year round at the Ye Olde Christmas Shoppe in Liberty Square, and right after Halloween many shops stock at least some Christmas stuff. But during the party you can also find a few items that are specifically branded for the Christmas party, including t-shirts, trading pins, and Vinylmations.

If you love Christmas and want to take in all the special events offered only at the party (special shows, special character greetings, etc.) then the party might be a good choice for you. If you only have a limited time to visit the Magic Kingdom, you can see and do a lot during the party – even in the shorter hours for the party – since admission is limited. But if you are looking to just visit the Magic Kingdom, then the Party might not the best choice, value-wise, for you since the hours are far shorter than a typical operating day.

What do you think about Mickey’s Christmas Party?