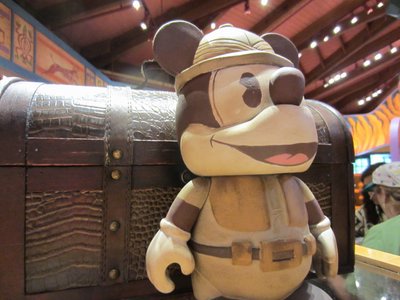 Monday, April 22, 2013 was a busy day at Disney’s Animal Kingdom. It marked the 15th anniversary of the park, which originally opened on Earth Day in 1998.  In celebration, let’s take a look how Disney celebrated the day with special events – and how you can join in the celebration and win a special Animal Kingdom prize package including a limited edition Disney trading pin:

– Special opening ceremony with a few speeches followed by some high energy singing and dancing.

– A free 15th anniversary button and special anniversary Guide Map to everyone entering the park. The Guide Map features a map of the park as it existed in 1998 as well as information on “gone but not forgotten” opening day experiences, including: “Colors of the Wind, Friends from the Animal Forst” show with Pocahontas at the Grandmother Willow’s Grove; Discovery River Boats; and “Journey into the Jungle Book” at the Theater in the Wild.

– Appearances by Disney characters not often seen in the park, including Pocahontas and her pet raccoon Meeko, Koda and Tug from Brother Bear, and Flik and Princess Atta from A Bug’s Life

– Special artwork and offerings, including the artwork of Carlos Cuba and a stand selling plumaria plants.

I’m giving away a special prize package to celebrate the Animal Kingdom’s anniversary. The package includes:

– Special Disney’s Animal Kingdom Guide Map, with fold out map that shows what the park looked like on its opening day in 1998

If you would like to win the Disney trading pin, button, special anniversary map, and times guide, just send an e-mail to me at [Contest is closed – Congratulations to the winner Jo Ann from New York!]. I’ll add you to our mailing list (if you aren’t already on it), and then I’ll select a recipient on or around May 2, 2013. I’ll request your mailing address and then send the package to you. This give-away is open to everyone, everywhere.

What do you think about Animal Kingdom’s 15th Anniversary?