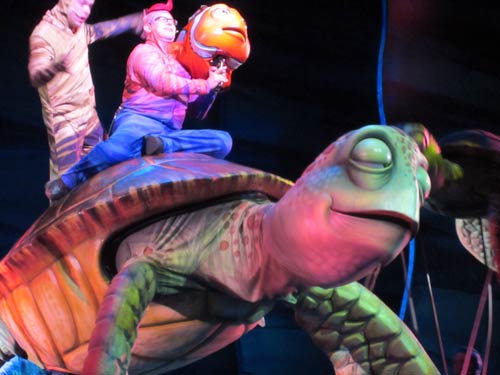 Disney’s Animal Kingdom is, of course, all about animals. And most kids like animals. However, each Disney park is unique, and each requires different thinking and planning – especially if you plan to take little kids to the park.

Some people think that the Animal Kingdom isn’t for little kids.  You might be surprised at how much little kids will enjoy it – if you are prepared for the unique nature of the park.  Here are three important things to think about if you plan to take smaller children to the Animal Kingdom:

Simply put, the Animal Kingdom is huge. It’s been said that you can fit the entire Magic Kingdom inside just one Animal Kingdom attraction (Kilimanjaro Safaris). With that, it means you will be doing plenty of walking since things are really spread out. This means you might need to consider a stroller, or be ready to move at a slower pace as you cover longer distances.

Disney spent a small fortune on landscaping the Animal Kingdom. Everywhere you look you will see dense plants and tress of all kinds. And surprisingly, all this foliage can trap the Florida heat and humidity, making for a hotter experience than you might get at the other parks. There are plenty of air conditioned experiences, but you might need to take it slowly on hot summer days.

The Animal Kingdom gets a bad reputation for having too few attractions. While the park may have fewer attractions, most of them are attractions that take much longer than just a few minutes. This might be good or bad for little kids, depending on how well they enjoy the subject matter and can focus their attention.

Let’s look at some of the more popular kid-friendly attractions at Disney’s Animal Kingdom, and some considerations for taking your children on them.

This is the signature attraction at the park, which takes you on a bumpy Jeep-like tour of natural animal habitats where you get to see all kinds of animals up close and personal. The tour takes about 20 minutes, and most kids who aren’t bothered by the vehicles occasionally speeding up will love it.

One of the most popular shows in all of Disney World, The Festival of the Lion King brings the popular Disney move to life with color, music, and fun. If your kids can deal with the intensity level of the movie, they will love the live show. The Cast Members get the entire audience involved in making noise and some kids get to march around the stage, having a great time in the process. The show lasts about 30 minutes, but time moves quickly with plenty to see.

Part of the Rifiki’s Planet Watch section of the park, the Affection Section in the Conservation Station is a favorite for kids of all ages. They get to pet, comb, and check out real live pigs and goats up close. The animals are normally very docile since guests are not allowed to feed them, so the animals don’t associate people with food. Also, the animals have ways to take a break and get away from people when they need some time to themselves.

Much like the Festival of the Lion King, Finding Nemo: The Musical takes the story of Marlin and Dory searching for the wayward Nemo and brings it to life with performers, puppets, and music. The performers give it their all and the music will tug at your heartstrings as kids or as parents. This show also lasts about 30 minutes, but the time flies by and before you know it, you will be walking out of the air conditioned comfort of the Theater In The Wild, humming the tunes from the show.

Plenty Of Fun For Little Ones

Disney’s Animal Kingdom is a different kind of park, but that doesn’t mean that little kids (and bigger ones too) won’t love it. Go in prepared for the unique nature of the park, knowing what you will see and do, and you are sure to have a great time.

Do you like to take little kids to Disney’s Animal Kingdom?