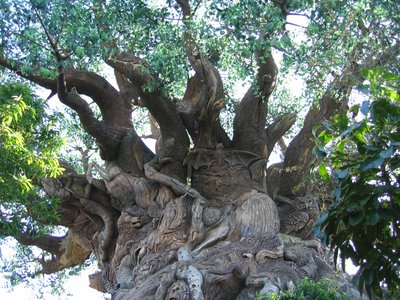 When guests enter the Disney’s Animal Kingdom theme park, they will soon notice what was successfully designed to be the centerpiece of the park: The Animal Kingdom Tree of Life. While most of the flora and fauna found in Disney World’s Resort is the real thing, this tree is one of the few exceptions. The massive tree was created by talented artists and Disney designers who wanted to build a tree that met three criteria:

After months of work, they set about the task of creating this beautiful work of art. That meant making more than 102,000 handmade leaves and thousands of branches. This tree certainly looks real from far away, but what is more amazing is that it still looks real no matter how closely you examine it.

The tree stands 145 feet tall and is 50 feet across. It needed to be that large in order to accommodate all of the carvings that the designers and artists imagined for the tree. Carvings of 325 animals, many of which are endangered, have been artfully carved into the Tree of Life.

Some of the carvings that are included on the tree are snakes, birds, elephants, hippopotamuses, Galapagos turtles, and hundreds more. You can see these amazing carvings up close as you stroll through the Discovery Island Trails.

The Discovery Island Trails wrap around the base of the Tree of Life and head in several directions. As you embark on the trails, you will come across caves, foot bridges and other interesting features. Of course, all look just as authentic as the tree itself.

While on the Discovery Island Trails, you will find that you are up close to a variety of fascinating wildlife including turtles, tamarin monkeys, kangaroos, and lemurs. There is also a special viewing spot where you will be able to watch as river otters splash, play and swim in the water below.

As you make your way through the Discovery Island Trails, be sure to pay close attention to the carvings in the tree. It took 10 artists a year and a half to complete this amazing work.

If you know anything at all about Disney, you know that they always aim for something bigger and better. So a giant artificial tree that is massive, hurricane proof, and totally realistic looking is good, but how could they make it even better? By putting an air conditioned theater within the root system of the tree! Get out of the Florida sun and cool off while you enjoy a show called It’s Tough to be a Bug. This 3D movie provides a fascinating look at the life and work of bugs. This show is appropriate for all ages.

The centerpiece of Disney’s Animal Kingdom theme park is the Tree of Life, but what about the rest of the park? Below is a sample of what you can expect to see and do  while visiting the park.

The park, the biggest in Disney World, is comprised of seven areas, including Discovery Island which was discussed above.  The other six are listed below.

Oasis is the first area that you will encounter when entering Disney’s Animal Kingdom theme park. Here you will see deer, birds, and other creatures all set in beautiful lush gardens. You will see unusual animals such as the anteater.

Oasis is a wonderful introduction to the rest of the park.

If you want to see Disney characters while visiting the Animal Kingdom theme park, Camp Minnie Mickey this is the place to do it. Just follow the marked trails to reach your favorite characters. This is the perfect time to take pictures and visit with some of the characters that your kids (or you) love from your favorite Disney movies.  There is also where you can see the fabulous Festival Of The Lion King, a Broadway-styles show that is a visitor favorite.

If you ever wished that you could go on an African safari, the Kilimanjaro Safari will give you a taste of what that experience would be like. You will ride in open air cars through acres and acres of a recreated jungle. While on the safari, you will see giraffes, rhinoceroses, zebras and many more beautiful animals.

The kids will surely love watching Mickey’s Jammin’ Jungle parade. This parade pays homage to all things animal, and even the Jeeps and other vehicles are decked out in animal prints!

The Asia area of Disney’s Animal Kingdom theme park is home to many popular attractions. The whole family will enjoy the Maharajah Jungle Trek. This is a self-guided walking tour during which you will see many fascinating creatures, including a komodo dragon!

The Kali River Rapids is a great way to cool off. You’ll head down river on a raft where you will get splashed by geysers and where you might get totally soaked as you head under the waterfalls.

Expedition Everest is a popular roller coaster set in the mountains. While on the ride, the car you are in will have to perform twists and turns in order to avoid Yeti (the abominable snowman) who will be hot on your trail.

In some ways, this is one of the most important areas in Disney’s Animal Kingdom theme park. It is here that guests can learn how to do their part to protect endangered animals.

Dinoland USA. provides a look at some of the animals that have become extinct, including the methods used by paleontologists to uncover some of their secrets. Kids can dig for fossils and you will see Dino-Sue, a replica of a Tyrannosaurus Rex found in South Dakota.

A Great Tree And More

The Tree of Life is an impressive structure that is meant to draw attention to the many endangered animals on the planet. As you enjoy your time at Disney’s Animal Kingdom theme park, be sure to pay attention for ways that you can do your part to help these animals and protect their precious habitats.