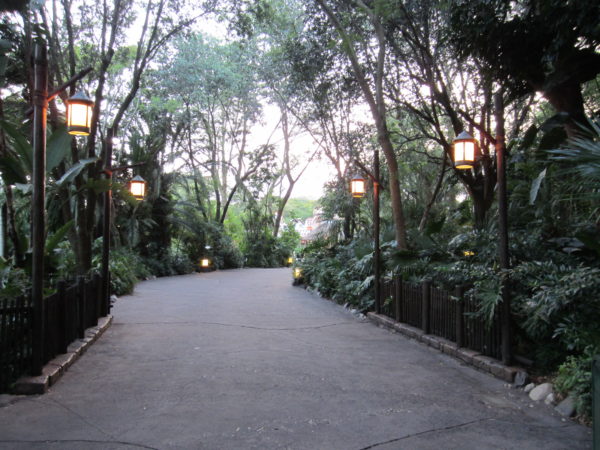 Walkway from Asia to Africa - Lanterns at dusk

Disney’s Animal Kingdom is full of details, as are the other Disney World theme parks, but it is easy to overlook these details. Sometimes they’re so small that guests don’t see them; sometimes they’re so big that you don’t even realize there are details hidden right in front of your eyes!

In my humble opinion, Disney’s Animal Kingdom demonstrates Disney’s attention to detail like no other park. Animal Kingdom is a theme park, but it’s also heavily devoted to conservation of the earth and the animals on it. The details contribute to these overarching principles if we can just recognize them.

Details also enrich your park experience. Disney’s theme parks are much more than just a bunch of attractions put together in one place. There is a theme, and sometimes several themes, strung together to create a story. This story creates the illusion that you’ve been transported to a land far away from real life. Sometimes that land is a very real place, and sometimes it’s fantasy; regardless, it becomes very real once you’re in it.

Today, we’re going to take a look at the details in Animal Kingdom that help support the story and transport you!

Animal Kingdom is full of little details. When you first enter at Discovery Island, you’ll realize this. These walkways lead to the themed areas representing Africa and Asia.

First, look down. See the leaf prints and mud cracks in the ground? Imagineers created a large cast of mud then reproduced it several times meaning the walkways were actually created with a mold. To make it more dramatic and distressed, they blew water into the naturally occurring cracks to widen them. These walkways continue throughout the park.

Next, visit the Dawa Bar just on the edge of Harambe Village. It’s the one that looks like a dilapidated concrete parking structure. Listen closely- can you hear the glasses clinking, the voices, the radio, and the persistent knocking? The story goes that the landlord who runs the hotel above the bar is trying to collect the rent from the students who live in the hotel because hey haven’t paid in a long time. This may seem like a strange detail, but it helps the story hold up and makes it more real!

Across from Dawa Bar in Africa is the Harambe Fort. As the name suggests, it looks like an old fort with wooden doors, stucco walls, exposed bricks, and a very high thatched roof. It looks pretty imposing, and many people assume that it’s off limits, but it’s a great place to relax. There are tables and chairs on the inside, and there are hardly ever crowds in here. Look around on the walls. There are hidden images all over the place including a hidden Baloo. Harambe Fort, according to the story, dates back to 1420, and since then the village has gained independence. Walking around, you can see a variety of architectural themes and even some modern amenities like a Computer Training Centre.

Pandora is the newest land in Disney’s Animal Kingdom, and it was part of the park’s largest expansion ever since opening in 1998. Pandora is based on the movie Avatar, and the theming around the land continues the story started in the movie. The story will continue in Avatar 2, and the land will continue to evolve as the saga does.

One detail in Pandora is the downed helicopter covered in overgrowth. It’s kind of hard to see because it’s off the main path tucked away in the vegetation.

Speaking of vegetation, Disney Imagineers created some really fun plants for Pandora. One is a giant plant with glowing patches. If you strike the patches, the plant starts to sing and will eventually spew streams of water across the sidewalk. Who knew that the plants were interactive?! This plant is near the Sacred Place of Song, or Swotu Wava, where you can experience a different kind of musical entertainment. Here you’ll find an interactive drum circle, which guests are free to drum on most of the day. Several times a day, three professional drummers perform the Na’vi Drum Ceremony, a cultural tradition.

Pandora wouldn’t be part of Disney World without a few Hidden Mickeys. Look on the walkway near Pongu Pongu, the drink lounge, where you’ll find three rust circles in the shape of Mickey. The famous Mouse makes a bioluminescent appearance in the Flight of Passage Queue.

Pandora itself is pretty impressive, but the attractions do not disappoint.

Joe Rohde, well-known Disney Imagineer, said that “every single knot” of the weaving accents throughout the land was meticulously hand-tied. This painstaking process was an important detail to make the attraction look realistic.

Avatar Flight of Passage puts riders on their on banshee and flies them through the World of Avatar. Besides the giant Na’vi floating in the tank, which you really can’t miss, there are smaller details that you might not have recognized yet like the unobtanium velocivirus, a “colonial cooperative virus that can use its own micro-vibrations to echolocate and travel.” In other words, this virus, that looks like a sea urchin, can work together to find a host; the problem is that it has a hemorrhagic effect on the Na’vi people. The Pandora Conservation Initiative is studying this virus, thus the reason that it appears in the queue of this attraction, to find a way to kill it and save the Na’vi people.

Asia is another area full of really cool details, but it’s not themed for a specific place in Asia. Instead, Disney made their own village, like Harambe in Africa, called Anandapur or “place of delights”. One detail that they did carry into the created village is the Tiger Tree prayer tree covered in scarves, bells, and other trinkets used to commemorate dead loved ones. This is a common practice in Asia.

The theme is carried through into the attractions of the land including Kali River Rapids, which takes guest through an interesting queue set in a Kali Tiger Temple complete with Balinese puppets, a prayer wheel, brass gongs, and Mr. Panika’s office. Panika owns the business, so he’s pretty busy, but if it’s out you can always see his two resident geckos who are always there. The ride itself takes guests on a wild ride down a river damaged by illegal logging. All of these details are culturally accurate and help to perpetuate the story.

Finally, Expedition Everest tells the story of the highest summit in the world. When you first enter the queue, examine every item in the Yeti Museum. Many of them are actual artifacts found on and around the mountain. There are also several Hidden Mickeys in the queue.

Do you enjoy the theming of Disney’s Animal Kingdom?