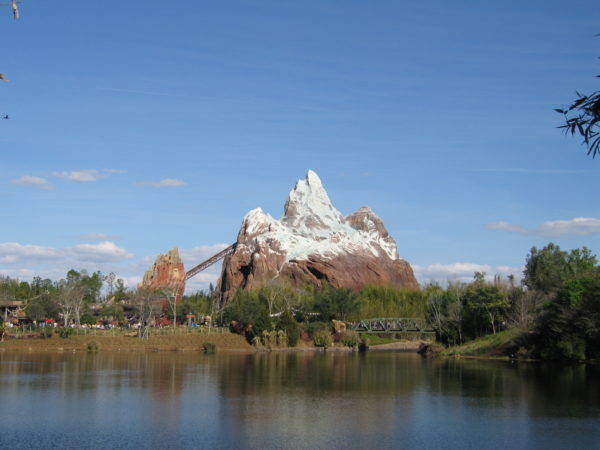 Expedition Everest across the lake

Walt himself dreamed of making an animal kingdom in Disney World. It wasn’t possible in Disneyland because of the proximity to a large city, but Disney World had so much open space that surely it could work!

Disney executives tabled the idea after Walt’s passing because the logistical difficulties of bringing live, wild animals in contact with guests.  It posed major safety concerns. Instead, they created Jungle Cruise, which used animatronic animals that posed no real threat to visitors while putting them in a natural setting.

On Earth day in 1998, Disney’s Animal Kingdom opened as a “kingdom of animals… real, ancient, and imagined.” It seems that Walt’s dream came true after all!

Let’s take a look at ten reasons why Disney’s Animal Kingdom is more than “just a zoo.”

1. Not a Typical Theme Park

Disney’s Animal Kingdom is the second largest theme park in Disney World measuring at over 500 acres. You might expect this to mean that there are a ton of attractions, but the park is more about historical and cultural theming than anything else.

Where as Magic Kingdom is meant to be artificial and Epcot and Disney’s Hollywood Studios create a fantastical version of real life, Animal Kingdom has a real world feel. The architecture fits the theme, and the buildings almost recede into the landscape. A perfect example of this is Flame Tree BBQ, which is very literally built into the earth.

Much of Animal Kingdom is covered in greenery and floral that is not as meticulously maintained as the other parks. Animal Kingdom really creates a sense of place, while other theme parks use the attractions to tell the story. It’s meant to be explored and discovered.

This isn’t to say that Animal Kingdom doesn’t have exciting attractions. In fact, the attractions are indeed very much a part of the theming but the theming doesn’t rely on them.

Expedition Everest shares the significance of the Yeti and Mount Everest. Kali River Rapids immerses guests in a logging job that is destroying the forest. Dinosaur takes time-travelling guests back to the time of these prehistoric creatures to capture and return one for research in modern day.

There are also shows like It’s tough to be a bug, Finding Nemo: The Musical, and Festival of the Lion King that entertain guests with imagined characters from Disney Movies.

However, it’s much more than your average zoo. Pangani Forest Exploration trail, Maharajah Jungle Trek, Rafiki’s Planet Watch, and the Oasis all provide unique and unexpected animal encounters. There are even Cast Members available to answer questions about the animals you see.

The Flights of Wonder bird show is both educational and entertaining while teaching the audience about birds and their habitats, diet, and characteristics with some comedy mixed in.

While you will encounter animals at every zoo, I think the real difference here is the quality of the animal’s homes and the Cast Members’ attentiveness to the guests’ questions. I could talk to them for hours!

Remember when I said that Animal Kingdom uses culture to create a real sense of place? You won’t see many character meet and greets in Animal Kingdom because it’s more appropriate for the theme to have musicians playing music from the culture of the land.

The Burudika (Swahili for “to be refreshed”) street party performs Afro-pop in Harambe Village. Tam Tam Drummers also perform in Harambe. Their upbeat beats will surely have you dancing! Chakranadi is an Indian musician playing the sitar and the tabla.

These performers contribute to the immersive feeling of the lands in which they perform. If you’ve never stopped to enjoy their show, you need to do yourself a favor and watch them. They are quite entertaining!

Most theme parks, even those in Disney World, have clear entrances and exits to attractions, restaurants, and shows. Animal Kingdom blurs the lines so it’s one big story starting as soon as you enter the park. You can’t tell when you cross from one land to another, and sometimes you end up in line for a ride or show without even realizing it.

The story is so good that you forget there’s a story.

Take Kilimanjaro Safaris for example. The attraction itself takes place on the Wildlife Reserve in Harambe, but the story begins as soon as you enter the Africa section. Before you know it, you wander into the queue and board the safari vehicle.

When Disney Imagineer Joe Rhode took charge of designing Animal Kingdom, he wanted it to be different from any other theme park and zoo that existed. In fact, he wanted to exclude a very common theme park staple: a park map. He said refusing to give guests maps would force them to get lost and create their own adventure just like real explorers.

There were some concerns with this when it came to restrooms and first aid, so park maps were made available to guests, but the Oasis section was created with the sole purpose of forcing you to choose your own adventure. On this multidirectional path, you’ll find hidden animals and scenic overlooks.

Not only is Disney’s Animal Kingdom highly accredited when it comes to zoo stuff, but some of the animals have been able to prevent potential extinction.

Since 1998, when the park opened, seven elephants, eleven giraffes, and eight white rhinos have been born in the park. Disney was also part of the first effort to move a white rhino and her baby back to Uganda in 1999 where the rhinos were all but extinct. In 2009, the first white rhino was born in Uganda in 25 years.

Rafiki’s Planet Watch is considered an attraction, but it’s actually more than that. It’s only accessible by boarding the Wildlife Express Train making it feel like a park within a park.

There are ten sections in this area including three special sections: Veterinary Treatment Room, Nutrition Center, and Habitat! Habitat!.

The Veterinary Treatment Center gives guests a hands-on look at how the in-house vets care for both well and sick animals. You can see well check ups plus real animal surgeries. One time when I was there, they were fixing an infected tooth and gum on one of their big cats.

The nutrition center teaches you about how animals on property eat, and you’ll even get to see some meals being prepared! You might be surprised at what some of them like!

Habit! Habitat! teaches guests about conservation techniques on property, around the world, and in your own home. You can learn conservation strategies you can use in real life like how to build a butterfly garden, how to care for your local birds, and how to build a garden at home.

Kilimanjaro Safaris is, technically, another attraction and we’ve already talked about it, but it deserves it’s own section.

While other zoos place animals in structures, it appears that these animals are free to roam wherever they please. In reality, each habitat is divided by natural structures that act as fences to keep each species in their designated area. However, the sections are so large that the animals don’t feel confined, and they are perfectly content.

Specifically, the lions have some special accommodations. They came from a cooler climate, so they were not inclined to lie on a hot rock in the middle of the Florida sun. Imagineers and animal caretakers came together to create an air conditioning system to keep the rock very cool. There’s no reason they would want to leave their comfy spot! It also makes for perfect viewing for guests.

When Michael Eisner dedicated Animal Kingdom, he said that all creatures would be honored including ancient and mythical creatures.

Dinosaur, Dinoland USA, and Dino-Rama all honor creatures from the past. Chester and Hester’s Dino-Rama may seem a bit cheeky to first time visitors, but Imagineers intended it this way. Dinosaur teaches riders about these ancient creatures and even allows you to see realistic animatronic versions of dinosaurs that existed thousands of years ago.

When Pandora – Land of Avatar opens this summer, it will finally bring the promised mythical creatures to Animal Kingdom.

Before you head into the park, stop and take a look at the sign. You will see more than real-life animals!