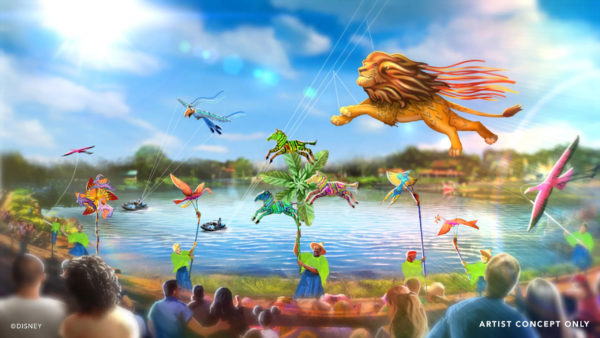 October 1 will be a very busy day at Walt Disney World.

In addition to the opening of Remy’s Ratatouille Adventure , the debut of Harmonious at EPCOT, and the debut of the new nighttime spectacular Disney Enchantment at the Magic Kingdom,  we have learned that Disney’s Animal Kingdom will also get a new show.

“Disney KiteTails” will debut on October 1, 2021, at Disney’s Animal Kingdom.

Disney will present this new show multiple times throughout the day at Discovery River Amphitheater, (the former home of Rivers of Light).

The show will feature performers flying windcatchers and kites of all shapes and sizes. Out on the water, elaborate three-dimensional kites – some stretching to 30 feet long – will depict Disney animal friends, including Simba, Zazu, Baloo, and King Louie.

Excited about a new show coming to Animal Kingdom?