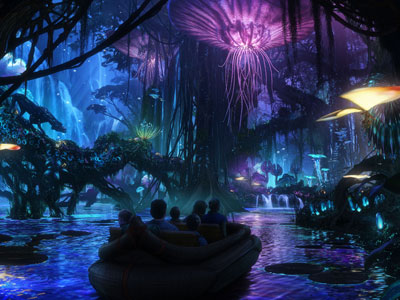 What to Expect from the Animal Kingdom Expansion

Animal Kingdom attracts large crowds, but these crowds have never been as large as those at Disney World’s other parks, which have much more to offer. The Themed Entertainment Association, which tracks theme park attendance statistics, estimates that Disney’s Animal Kingdom served nearly 10.2 million guests in 2013 compared to the Magic Kingdom, which served nearly 18.6 million guests. Combined with the fact that there are only a few really popular attractions, including Expedition Everest, Kilimanjaro Safaris, It’s Tough to be a Bug, DINOSAUR, Dinoland, and Kali River Rapids, one can see that there is room to grow.

What’s more, Animal Kingdom has very limited hours because the animals need time to rest. With no real reason to stay after the mid-day parades, guests often visit Animal Kingdom for just a few hours.

Disney is working hard to change all of these statistics. In April 2014, Disney broke ground for Animal Kingdom’s largest expansion since it’s opening in 1998, which includes both AvatarLand and a new nighttime spectacular.

AvatarLand (Pandora – The World of Avatar)

James Cameron’s 2009 blockbuster grossed over $760 million dollars. The movie takes viewers into the land of Pandora as a paraplegic Marine tries to save the Na’vi people.

Cameron is working on three sequels with the first one set to release in theaters in December 2016. The movie release will coincide with the opening of AvatarLand in Disney’s Animal Kingdom in early 2017.

When Bob Iger, Disney CEO, rode in a concept vehicle of the ride called “Soarin’ Over Pandora, he said, “It felt so real, so lifelike.” The ride vehicle is said to be a banshee that mimics a real-life, breathing beast.

The ride is said to be a lot like Soarin’ in Epcot, which has 3D projection, two mirror-image theaters, and total immersion.

AvatarLand will also be much like DinoLand, which completely immerses guests into the cheap carnival atmosphere. Designers say guests should expect to see the bioluminescent forest, which comes to life through interaction.

Presumably, the cooperation between Disney Company and James Cameron’s Lightstorm Entertainment Company is a response to Universal teaming up with Warner Bros. to create The Wizarding World of Harry Potter and Diagon Alley. With the opening of this new land, the original concept of Animal Kingdom housing both real and mythical creatures will be fulfilled.

Animal Kingdom is the only Disney World Park without a nighttime spectacular to cap off the night. This too will change.

The Official Disney Blog says that Rivers of Light will be seen on “a broad, natural stage of the Discovery River between Discovery Island and Expedition Everest” with “live music, floating lanterns, water screens, and swirling animal imagery.”

Are you looking forward to the expansion of Disney’s Animal Kingdom?
Leave your comments below.