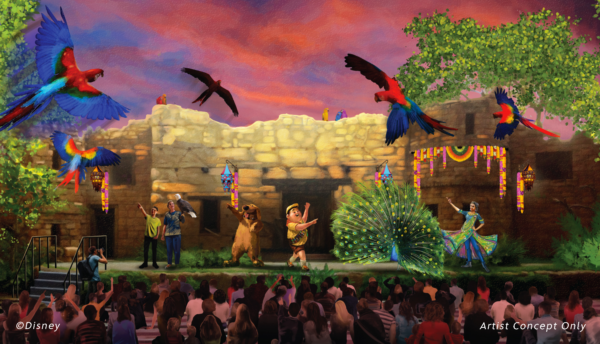 Disney’s Animal Kingdom opened on Earth Day in 1998, which means the park will celebrate its 20-year anniversary this year on April 22nd. Disney takes advantage of any reason to have a celebration, and this is a pretty significant milestone. While they celebrate Earth Day every year, this year’s event will be even more special.

The Party for the Planet Celebration will start with a new backstage tour and continue for a month or so with special events throughout the park. The whole thing is sponsored by Disneynature, an initiative that started in April 2008 with the goal of bringing the world’s top nature filmmakers together to engage, inspire, and educate theatrical audiences everywhere.

Let’s take a look at how Animal Kingdom will celebrate its anniversary and, more importantly, Earth Day this year!

Up! A great Bird Adventure

Up! A Great Bird Adventure, which will replace the now shuttered Flights of Wonder, will officially open on April 22, 2018 as part of the 20th anniversary celebration.

The same birds you know and love will still be part of the story, but now it’s Russel and Dug from the Disney Pixar movie Up! getting the education. Russel, a Senior Wilderness Explorer, encounters exotic birds and learns all about them during this free flying show performed multiple times daily!

Disney’s Animal Kingdom will debut a brand new backstage tour on April 1st, 2018. Guests of the tour will enjoy an all-day behind the scenes journey based on how the Cast Members of the park make nature come to life every day.

Rafiki’s Planet Watch will be a focus of the tour where you can meet animal ambassadors, participate in unique mini tours, learn about animal nutrition, visit the state of the art veterinary hospital where animal residents undergo preventative and corrective procedures, and hear about how Disney promotes wildlife conservation all around the globe.

Another part of the tour includes a one-hour elephant encounter called Caring for the Giants tour. Guests will also meet a much smaller seasonal resident; the purple martin birds migrate to Disney world every year, and you can see their nests on this leg of the tour.

The tour culminates with a VIP viewing of Rivers of light complete with premium seating.

The tour is available for a limited time only, and is scheduled to end on May 5th. It costs $59 to attend the tour (which seems like a pretty good deal), which starts at 11am.

On Earth Day, April 22nd, Disney’s Animal Kingdom will host a festive kick-off celebration ramped up for the anniversary, but mostly focused on Earth Day and conservation.

The celebration will be complete with music, dancers, and characters, and will take place in front of The Tree of Life.

Donald and Friends Meet and Greet

Donald Duck and his friends are celebrating the 20th anniversary in Dinoland USA with a dinosaur-themed party. During the experience, Donald discovers that his bird ancestors were actually dinosaurs.

The party will have colorful décor, playful character greetings, and rarely seen characters like Scrooge McDuck. There will also be a DJ on the Truck-o-Saurus stage. It’s a great way to end your day in Animal Kingdom!

Besides these specific celebrations, there will be limited-time only family-friendly activities throughout the park for the 20th anniversary like exclusive PhotoPass opportunities highlighting the Reverse the Decline Campaign and Disney’s Conservation Fund, themed treats, new penny press designs, face painting, and even more animal care experts on hand to provide enrichment opportunities, answer questions, and show off training and feeding sessions.

Young fans can earn a special Wilderness Badge to add to their collection and learn how to connect with nature while on vacation and back at home.

Guests will find commemorative merchandise inspired by nature and wildlife including plus toys, apparel, 20th anniversary souvenirs, and more. There will also be a Commemorative Adventure Guide available and a Special Edition Print by Imagineer Joe Rohde who will be available for a signing on April 22nd from 1 to 4pm.

All of these things are available for a limited time only.

Will you celebrate Earth Day in Animal Kingdom?