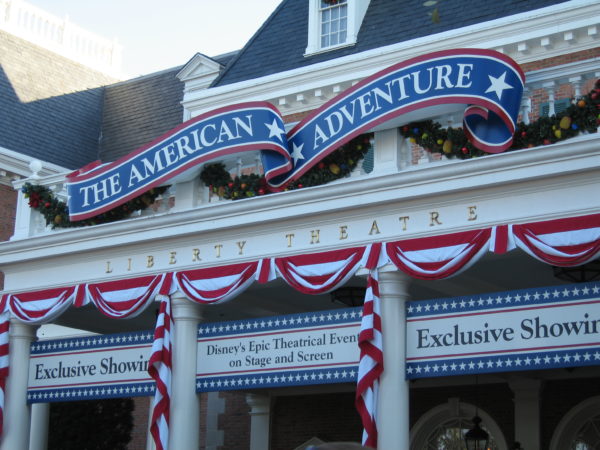 World Showcase in Epcot takes guests on a journey around the world discovering cultures, food, and wares of eleven different countries. I might be a little partial, but my favorite is the American Adventure Pavilion.

It’s located on the far side of World Showcase and was an opening day pavilion.

The American Adventure features a large building in Colonial style complete with American Flags. The pavilion’s main attraction by the same name recently closed for refurbishment but is now reopened!

The new version takes advantage of new technology with all-digital projection, an new 72-foot screen, and new speakers with the highest quality viewing experience possible. Golden Dream, the show’s theme song, has been re-recorded with the same music and lyrics but with new orchestration resulting in an even better experience.

The finale has also been updated to salute some modern-day notable Americans like John Williams, composer of the Star Wars series score, astrophysicist Neil deGrasse Tyson, and ballerina Misty Copeland.

American Adventure plays every 45 minutes starting 15 minutes after the park opens and until the park closes.

The American Adventure Pavilion is also home to the American Heritage Gallery, a collection of 400 years of African-American artifacts representing achievement and innovation throughout the past four centuries.

Voices of Liberty performs several times a day in the pavilion’s lobby. This a capella group is dressed in 1800s garb and performs uplifting songs like America the Beautiful, This Land is your Land, and Yankee Doodle Dandy.

American Adventure show update:  Will you see it?