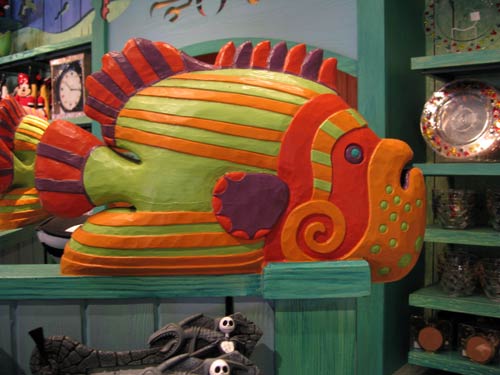 There are plenty of misconceptions about Disney’s Animal Kingdom theme park.

Some of the most fascinating design intricacies of Animal Kingdom can be found in and around the buildings in the Discovery Island area of the park.

At first glance, the buildings in Discovery Island simply look colorful and like they are covered with animals, but there is much more happening than just color and animal decorations.

Most of the buildings in Discovery Island have an unspoken animal-based theme, and then are adorned with animals that fit that theme. This isn’t something that is written down anywhere or noted on the Guide Map, but it shows the detailed level of thinking that Disney Imagineers put into the design and art of the park.

Let’s take a look at several buildings, their themes, and what types of animals you can find.

Building: Creature Comforts is a gift shop that carries a wide variety of merchandise including plenty of toys and stuff for the young and young at heart.

Theme: Animals with spots and stripes

Animals: Here you will find bumble bees, zebras, and tigers. 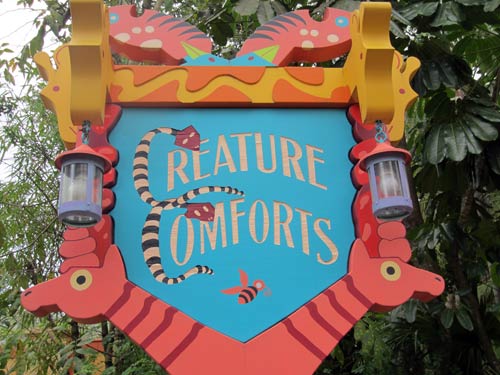 Creature Comforts sign – all about animals with spots or stripes. 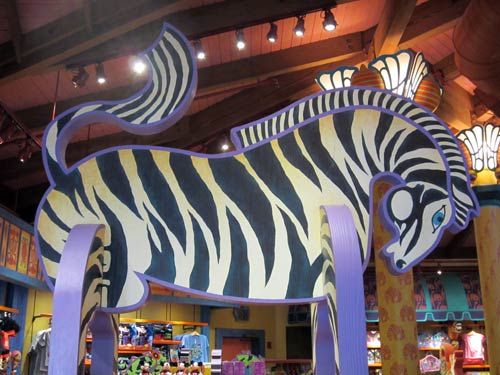 Zebra with stripes in Creature Comforts. 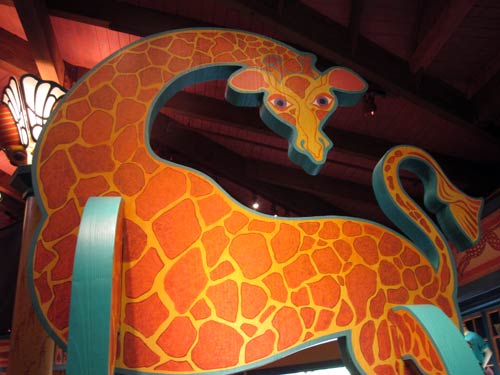 Giraffe with spots in Creature Comforts.

Theme: Animals that work or migrate.

Animals: Here you will find beavers, donkeys, camels, and geese. 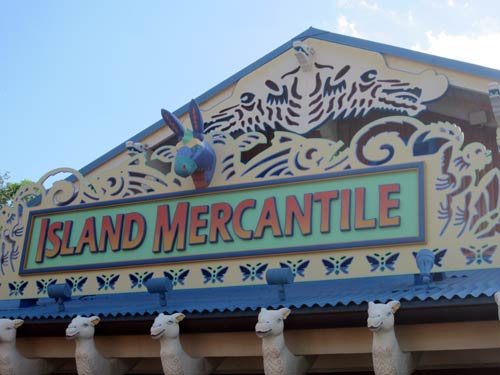 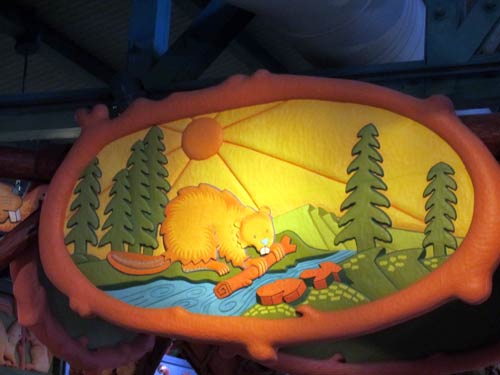 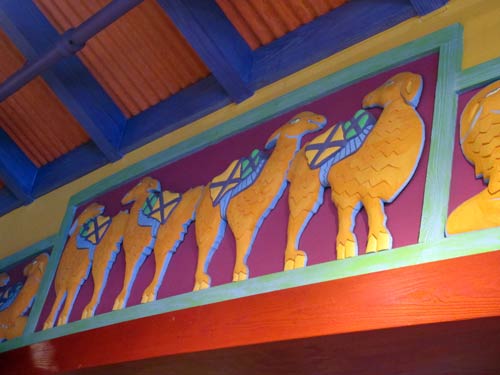 Building: Beastly Bazaar is a gift shop that carries candies and home decorations like figurines, pillows, towels, and dishware.

Theme: Animals that live around or in water. 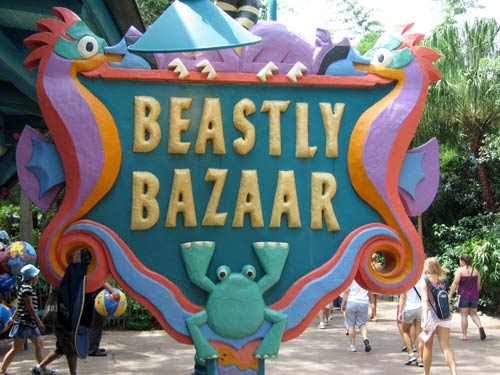 Sign for Beastly Bazaar – all about animals who live near water.

Fish carving on the outside of Beastly Bazaar. 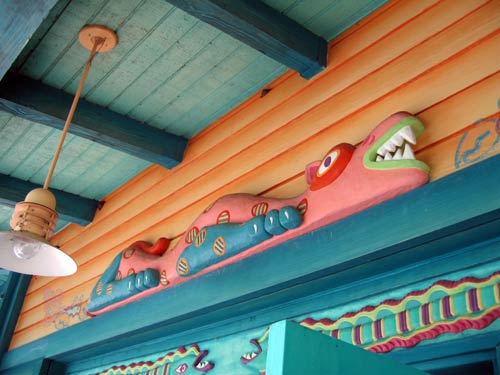 Crock or alligator design on the outside of Beastly Bazaar.

Theme: Animals that travel in herds.  The design may be a metaphor for trend setting too.

Animals: Here you will find elephants, lions, and rhinos. 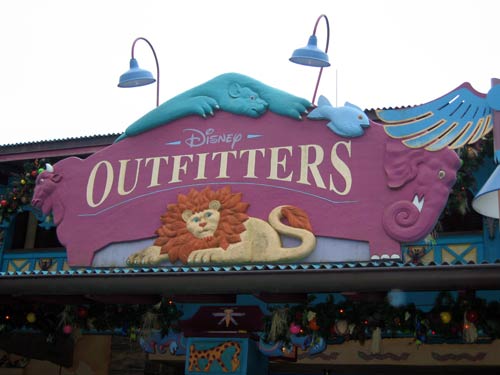 Disney Outfitters sign – all about animals who travel in groups. 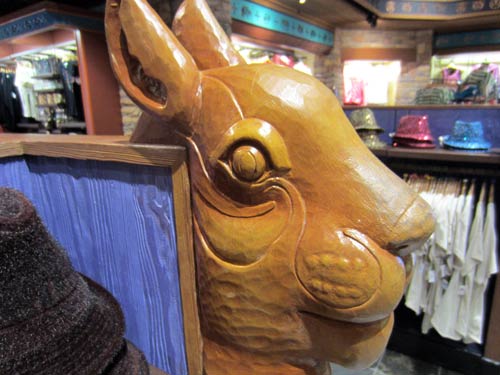 Carving of a rabbit; they travel in colonies or herds. 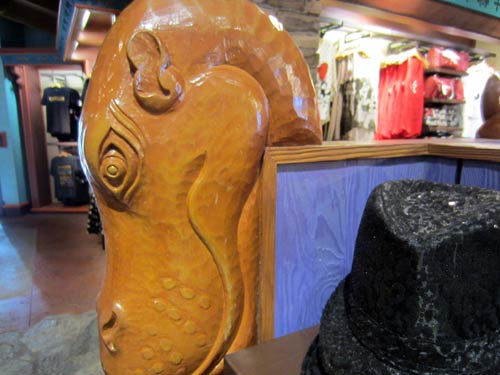 Carving of a hippopotamus; they travel in groups called a ‘bloat’.

Building: Flame Tree BBQ is one of my favorite quick service restaurants in all of Disney World. It has delicious ribs at a reasonable price. The seating is outdoors but covered, and some areas have amazing views of Expedition Everest.

Theme: Hunters and their prey. 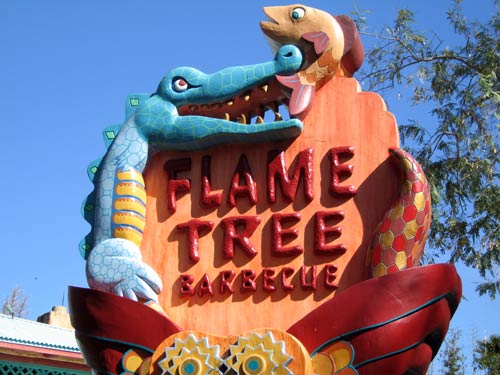 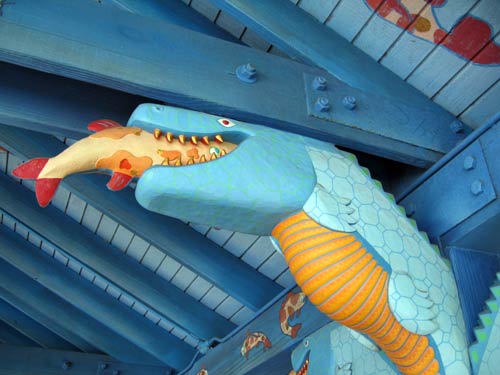 Everywhere you look – hunters and their prey.

The next time you or someone you know thinks that Disney’s Animal Kingdom doesn’t have the same design quality as other Disney parks, remember that, all around Discovery Island, there are details in the design that most people miss every day.

Do you like the design elements in Animal Kingdom?