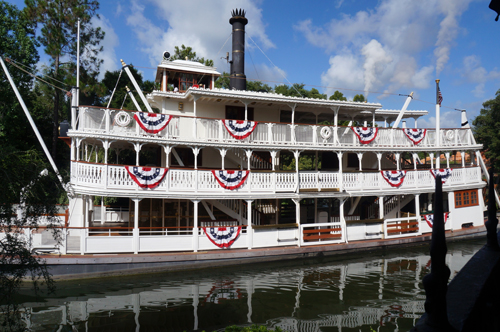 Disney World has many icons in the parks and on property. Anyone who has visited Disney probably has the classic Cinderella Castle picture, Spaceship Earth picture, Sorcerer’s Hat picture, and Tree of Life picture.

But what happens when you visit the Disney during the “off-season” when crowds and prices are low but refurbishment is at its peak? Many of the well-known photo spots are covered with construction walls or obstructed by cranes in the background.

Fortunately, Disney has tons of great photo locations, and this five-article series will outline many of them.

Here are some alternative photo locations for Magic Kingdom with a brief description of why these locations are so iconic even though they are sometimes overlooked as traditional icons.

Splash Mountain officially opened in Disney World’s Magic Kingdom on October 2nd, 1992, just one day after Tokyo Disneyland. The concept was originally that of Imagineer Tony Baxter while he was sitting in rush-hour traffic on his way to work. The ride cost $75 million and was one of the most expensive projects Walt Disney Imagineering created when it was first built in Disneyland. To save some money on the over-budget project, Imagineers closed down Disneyland’s America Sings and used the Audio-Animatronic Characters on Splash Mountain. It was a raging success and Splash Mountain replicas sprung up at Magic Kingdom and Tokyo Disneyland just three years later.

The Haunted Mansion is home to 999 happy haunts, but there’s always room for one more! Did you know that the concept of a Haunted Mansion was originally created by Harper Goff even before a Disney Park existed? Walt’s first Imagineers sketched a crooked street that would lead off the path of the pristine Main Street that Walt envisioned. At the end of the winding path, visitors would find a peaceful church, a graveyard, and a run-down mansion high atop a hill over Main Street. Walt didn’t like this idea because he thought it would take away from the clean, family-style park he so desired. Eventually, construction began on both the Disneyland and Disney World Haunted Mansion simultaneously.

The Liberty Belle Steamboat is a replica of a Mississippi Steamboat from the 1800s and was part of Walt’s original plans for the park. Though it wasn’t an opening day attraction, it first sailed on the very next day. It serves as a nice transition between Liberty Square and Frontierland and provides a narrated tour of The Rivers of America.

Where is your favorite alternative photo location in the Magic Kingdom?