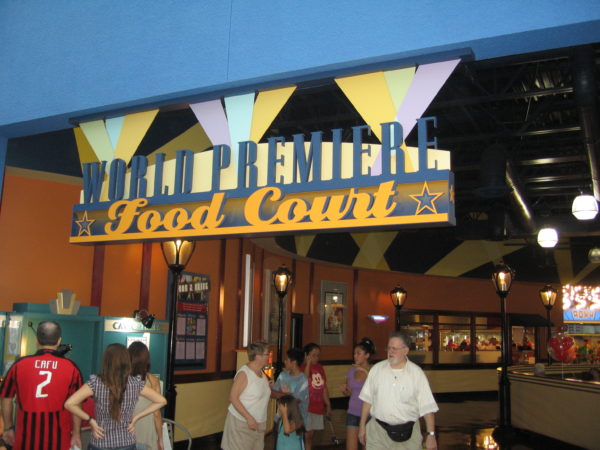 Many Disney World restaurants offer secret menus, but the newest secret menu to take the internet by storm is the World Premiere Food Court at Disney’s All-Star Movies Resort.

All-Star Movies is a Value Resort, so the food court is really the only dining location in the resort. It is in quick-service style and offers lots of options and lots of room for seating.

Unfortunately, the All-Star Resorts (Disney’s All-Star Music and Disney’s All-Star Sports included) cater to the masses when it comes to food options, and considering that the primary guest demographic includes families with young kids and kids and teens on school trips, those menu items include pizza, hot dogs, burgers, and fries.

On the other hand, Disney’s All-Star Movies does now offer a secret menu with some pretty “sweet” secret items.

If you want to know about the secret menu, you’ll have to head to the Roxy Counter and ask a Cast Member about it. They will – no joke – bring out a brief case and open it in front of you. Inside you’ll find several old-school viewfinders. You can flip through the viewfinders to see the secret menu items just like the old dessert menu at the 50s Prime Time Café.

First is the Bacon Mac and Cheese Dog. It is exactly what it sounds like- a hot dog on a bun topped with mac and cheese and bacon. It is pretty delicious, though not super impressive. The same dish is available in several other locations in Walt Disney World including Restaurantosaurus in Disney’s Animal Kingdom.

The Bacon Mac and Cheese Dog is $12.99, which is pretty standard for food court meals and for this particular serving.

2. Poutine with Gravy and Cheese Curds

Disney has really adopted the Canadian favorite known as Poutine, which is French fries with gravy. The Daily Poutine at Disney Springs offers several variations that are incredibly delicious, but All-Star Movies serves up a pretty standard, though secret, poutine.

The fries are the typical thin cut fries, and they’re topped with rich brown gravy and warm cheese curds. While I’d prefer thick-cut fries like the Daily Poutine in Disney Springs, for $7.99, I’m not complaining.

The real winner on the secret menu is the Cinnamon Bun Burger.

It’s exactly what it sounds like. A cinnamon roll, complete with icing, is cut in half like a bun. Then the chef adds a burger, white American cheese, and candied bacon! It’s sweet, salty, and it takes the typical food court burger to a whole new level.

It’s served with coleslaw and fries, and it’s just as messy and sticky as you would expect. For $14.99, it’s a pretty good deal.

All-Star Movies secret menu – have you tried it?