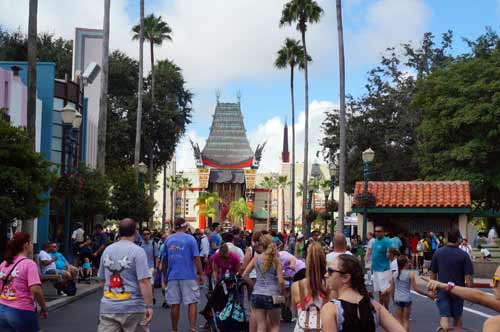 All Clear: View of The Great Movie Ride Is Finally Fully Restored

The giant sorcerer’s hat that sat directly in front of The Great Movie Ride at Disney’s Hollywood Studios has been down for a while, but it has taken some time for Disney to fully restore the area.

Removing the sorcerer’s hat was a huge job in its own right.  It involved removing tons of structural steel – all in the middle of a working theme park.  After the hat was gone, the pavement and surrounding area was rough and was often blocked by portable planters.

Soon, however, it was time to construct the stage for the Frozen Summer Fun. That event that ended on September 7, 2015.

Now that all that is out of the way, Disney completed the final clean-up of the area and we once again have a fully finished, open area in front of the Great Movie Ride.

Disney’s Hollywood Studios now has its own wide-open “hub.”

Are you happy with the newly cleared area around The Great Movie Ride?