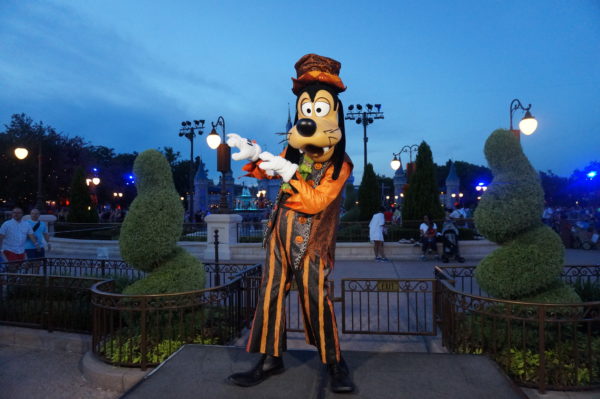 All About Mickey’s Not So Scary Halloween Party 2018

School hasn’t started yet in many places around the country, but Disney World is already celebrating Fall and Halloween at Mickey’s Not So Scary Halloween Party.

I went to the Halloween Party for the first time last year, courtesy of the nice folks at Disney Media Relations, and it was a ton of fun. I’m so glad I was able to go back this year, and I’m excited to share my experience and some new events with you!

Easily one of the biggest highlights of Mickey’s Not So Scary Halloween Party is the Boo to You parade. The Headless Horseman leads the march, and he’s followed by Disney characters dressed in their best Halloween Costumes.  Ghosts from the Haunted Mansion boogie down Main Street USA. The music is catchy, and there’s even some rhythm thrown in from the characters like the Gravediggers who dance and scrape their shovels on the street.

This family-friendly parade is about 20 minutes long and runs twice during the party at 9:15pm and 11:15pm.

Everyone loves a good fireworks show, and Disney really goes all out for holiday parties. The Halloween version of the Magic Kingdom fireworks show is called HalloWishes. Like the rest of the party, there’s a Disney Villains theme with Maleficent, Ursula, Cruella de Vil, Jafar, and Oogie Boogie conjuring up some mischief on and around Cinderella Castle. The soundtrack for the show includes some spooky favorites like Grim Grinning Ghosts, Poor Unfortunate Souls, Never Smile at a Crocodile, The Skeleton Dance, Who’s Afraid of the Big Bad Wolf?, Oogie Boogie’s Song, and Night on Bald Mountain.

The Sanderson Sisters have created quite a place for themselves in Mickey’s Not So Scary Halloween Party. Besides their own dysfunctional mucks to run, they’ve also enlisted the help of other Disney Villains and dancers to put a spell on everyone in Magic Kingdom. There are dancers, visual projections, and special effects that make the show one that you don’t want to miss. This year happens to be the 25th anniversary of the movie.

The Sanderson Sisters can be seen three times throughout the evening at 8:30pm, 10:45pm, and 12am.

The Dapper Dans are a favorite throughout the year, but on Halloween, the Cadaver Dans come out to entertain. You can find them in Frontierland offer comedy and music. Some songs you might hear include Cruella devil, Ghost Riders in the Sky, Grim Grinning Ghosts, Happy Trails to You, Home on the Range, Rawhide, The Headless Horseman, Trick or Treat, Tumblin’ Tumbleweeds, Wahoo, and Wy do they call me a Tenderfoot?.

The Monstrous Scream-O-Ween Ball returns this year at the Rockettower Plaza State in Tomorrowland. Prepare to dance the night away with some of your favorite characters from the Monsters Inc. series.

Shows begin at 7pm and midnight.

New this year is the Frontierland Costume Promenade. Little ghost guests can show off their costumes and get candy for their efforts.

There’s another dance party in Fantasyland where the smallest Disney fans can see some of their favorite characters from Disney Junior like Doc McStuffins herself!

The parties begin at 7pm and 10pm.

There are also some cool new effects in some of the attractions.

Pirates Of The Caribbean has live pirates (temporarily at least), and they’re warning guests to be on the lookout for Gunpowder Pete who is in search of the same treasure as Captain Jack.

The Mad Tea Party had special lighting and other cool effects making it a really cool party!

Space Mountain had a new soundtrack with rock music as you soar through the galaxy in pitch black!

Mickey’s Not So Scary Halloween Party: will you attend this year?