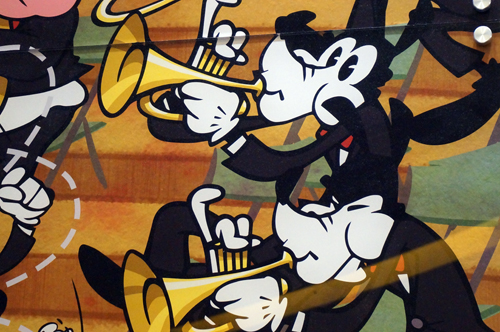 Disney’s Value Resorts are the least expensive accommodation option on Disney Property, but that doesn’t mean they’re cheap in any way. They offer the same level of service that guests expect from a Disney Resort, and the rooms and public areas are clean and well kept.

The Value Resorts may not have fancy restaurants, but Disney has upped the ante by refurbishing the food courts at these resorts.

The most recent refurbishment took place at All-Star Music’s Intermission Food Court, which reopened in December 2014. Let’s take a look at some of the details that give this area such a nice atmosphere.

The new atmosphere of Intermission Food Court is a huge contrast to the previous décor, which featured bold, primary colors and large murals of musicians. The new décor offers a modern theme with clean lines and neutral colors.

Other small details prove that this is still the home of music. Woodwinds adorn the Singing Spirits Bar ordering window, the beverage stations are topped with a drum set, and a guitar fret board appears on the walls.

As many Disney fans know, there are many details on the ceiling, and this is no different at All-Star Music’s food court. Hanging lamps look like trumpet bells, but even better than that is the ceiling itself! The tiles are alternated and stacked in a high/low, front/back pattern that mimics that of a xylophone! When you look down, you’ll notice whole notes in the wooden floor.

The ordering stations, not to be outdone, have music notes that represent Mary Poppins’ “Supercalifragilisticexpialidocious.” Also, the bakery cases have elaborate tiling underneath that represent synthesized music.

It’s not just the atmosphere that Disney put thought into. The food got a makeover as well.

There are still electronic menus above the ordering stations, but Disney also added a “Now Performing” menu at the entrance that gives a nice overview of the food offerings.

There is a lot of selection including create-your-own pasta, burgers, and even hot dogs. There is also a Specialty Shop that serves up unique selections like a Turkey & Muenster Focaccia Sandwich, a Cajun Mahi-mahi Sandwich, Taco Salad, and Nachos for lunch and Shrimp Creole, London Broil, Baked Chicken, and Salmon. Create-your-own-salad is also available for both lunch and dinner.

The Grab-and-Go Market is also open where guests can grab quick meals, snacks, and drinks from refrigerated cases and bakery cases. If you want to toast your bagel or heat up a food item from the restaurant or one that you brought on your own, visit the toasters and microwaves by the Pizza Pickup Window

For dessert, stop by the gelato shop, which serves many flavors of gelato and custom smoothies. If you’re feeling particularly ambitious, try the Mickey Gelato Sundae, which is a cinnamon-and-sugar Mickey waffle topped with gelato and whipped cream.

Do you like All-Star Music’s new Intermission Food Court?
Leave your comments below.