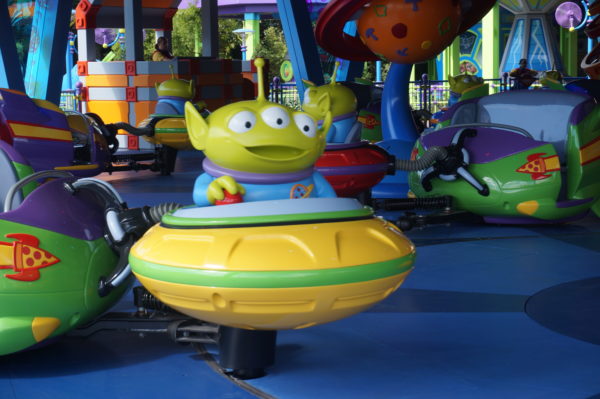 Alien Swirling Saucers is one of two new attractions in Disney’s Hollywood Studios‘ new Toy Story Land. I got to ride it during the media preview event, and it was a lot of fun!

It’s a little bit like the Mad Tea Party in Magic Kingdom in that it spins ride vehicles around, but it has a cool feature that Mad Tea Party doesn’t: it switches cars to different disc tracks throughout the ride, so you’re not spinning in the same spot. While this can be a little bit disorienting (and you can’t stop your car from spinning), it is a lot of fun!

As the story goes, Andy won a play set from Pizza Planet, and the toys assembled it for him. The attraction is very colorful and even has some electronic space music playing in the background. While there is a 32″ height limit, that only excludes the very smallest of riders who might get a little dizzy from the spinning anyways.

You can watch the video of my ride experience below, but I’ve also included some fun still pictures of the attraction and some details below. Enjoy!

Alien Swirling Saucers:  Fun, or too much twirling?