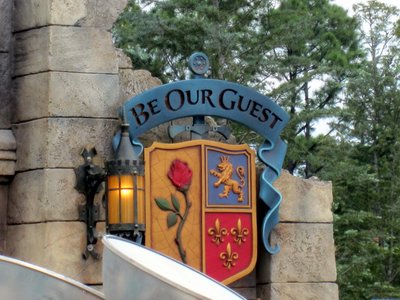 Alcohol Comes To The Magic Kingdom

Beginning in November, Be Our Guest will offer a variety of French wines as well as French and Belgium beers. According to the Orlando Sentinel, Maribeth Bisienere – the Vice President of Food and Beverages for the Magic Kingdom – said “You cannot walk into a French restaurant and not get a glass of wine or beer,” and went on to say “It made more sense to do it than not to do it.” (Source)

Not The First Time

While Disney has always offered alcoholic beverages in its other Orlando parks (Epcot, Disney’s Hollywood Studios, and Disney’s Animal Kingdom), the change at the Magic Kingdom has drawn mixed reactions from Disney fans. Reports state that message boards have comments running about half for the change, and half against the change.

Disney selected the wine and beer to compliment the menu developed by Disney Chef Roland Muller, who is French himself. He reportedly spent three years developing the quick service menu for lunch and the full service menu for dinner (Source).

The wine and beer list includes selections by both the glass and the bottle.

Examples of Champaign selections include:

Examples of white wine selections include:

Examples of red wine selections include:

And the most expensive bottle of wine on the list, a desert wine, is La Fleur d’Or, Sauternes which will set you back $97.

If you are interested in viewing the complete wine and beer list, you can see it here.

Really It’s About Story, Not Booze

All this goes back to storytelling. Disney didn’t just decide to throw a mug of Budweiser on the menu to make a few bucks (although I suspect they will reap nice profits for the addition of alcohol). Instead, they are creating a French dining experience, which really wouldn’t be complete without a glass of wine or a glass of beer.