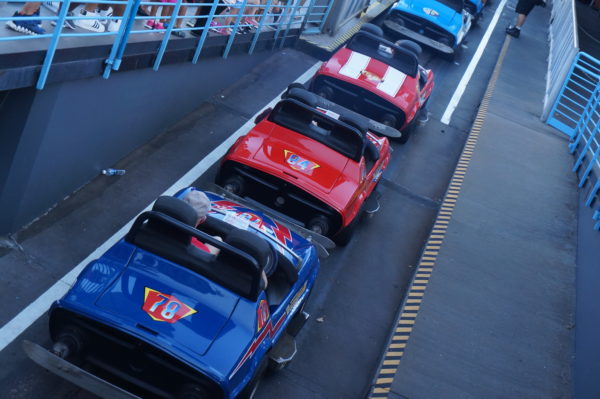 Disney World was created to be fun for the whole family. As such, there are many attractions that have no age or height limit for riders.

However, there are many attractions that do have height limits and are much too thrilling for young kids and even some brave teens.

Let’s take a look at an age-by-age guide to visiting Disney World with your kids!

Visiting with a one- or two-year old can be a lot of fun!

While a child at this age won’t remember anything from the vacation, you’ll get some great pictures, have a great time together, and make some great memories that you’ll keep forever.

Here’s a list of some attractions kids at this age will likely enjoy:

Besides being aware of appropriate attractions and shows, you’ll want to know where the Baby Care Centers are located. These areas have amenities like a kitchen for heating up milk or food, an area for nursing or resting, and some toys and TVs to keep older kids and parents entertained for a while as you take care of baby’s needs.

It’s obvious from the list above that Magic Kingdom has the most for young kids, but when kids reach three years old, they are likely out of diapers and are tall enough to ride some more exciting attractions like Tomorrowland Speedway (32 inches) and Barnstormer (35 inches). In fact, The Barnstormer is many kids’ first rollercoaster!

The only downside with waiting until three to take kids is that Disney starts charging admission at this age. The admission is discounted, but it’s still a pretty hefty amount. Consider taking your child just before he or she turns three to take advantage of the free ticket but also the maturity of your older toddler! This is especially helpful if your little one is on the taller end of the spectrum.

Another tip: kids meals are also discounted, but adult meals are pretty large even at most quick-service locations. Consider sharing a meal even if that means you get an extra side. It will still save you money and you won’t waste food!

By four years old, an older toddler is getting to be a very competent child. They are out of diapers and accidents become fewer and farther between. They’re also able to understand waiting in line, and this combined with even more height means a whole new world of attractions are open to your family!

Also, you’re still not committed to official schooling yet, so your schedule is likely more flexible allowing you to visit in the value seasons to save money and time waiting in lines.

At this age, you’re likely ready for things like Seven Dwarfs Mine Train in Fantasyland and Kali River Rapids in Disney’s Animal Kingdom‘s Asia section, both of which have a 38-inch height limit. If your child is really tall and has already hit 40 inches, even more doors are open like Big Thunder Mountain, Splash Mountain, Star Tours, Twilight Zone Tower of Terror, Soarin‘, Test Track, and Dinosaur.

If your child is shorter, it can be very frustrating for them because they want to try bigger things but they aren’t tall enough yet. If that’s the case, just avoid those things all together and don’t even mention anything like “maybe you’ll be tall enough next year.” Take heart in knowing that a child this age will probably only remember significant moments from the trip years later. Plan something really amazing like a character breakfast or a fireworks dessert party. These things will make an impact and they won’t care that they were too short to ride the big kid rides.

As kids get older, their selective memory becomes stronger, and they can remember significant events even years later. Visiting at this age is a blast for you and your kids! What’s more, these kids have attended school and are much better equipped to wait in lines, which is a good thing because your schedule might not allow you to visit in the value season and your child is likely tall enough to ride attractions with longer lines like Space Mountain, Expedition Everest, and Flight of Passage, all of which have a 44-inch height requirement.

On the downside, five- and six-year-olds will likely still need a break at some point during the day. Consider investing the money in a family suite at Disney’s Art of Animation resort. These rooms have a separate bedroom so you can let your little one sleep while you enjoy some rest yourself without disturbing a light sleeper.

By around eight years old, kids’ endurance is much higher meaning you won’t need to lug around a stroller anymore, and you’ll probably be over naps. Even still, a mid-day break isn’t a bad idea for young and old alike. Disney World can be overwhelming and tiring even for adults.

Also, at seven years old, kids can go on rides unattended as long as they meet the height requirements. If he or she wants to ride Rock ‘n’ Rollercoaster or Primeval Whirl (48 inches) and you would rather not get so dizzy, it can be done!

Finally, this is your last chance to take advantage of discounted tickets. After age nine, they’re able to ride anything in the park, which means they pay full price.

At some point in these early years of the adult ticket, your child will likely be old enough and tall enough to ride everything in the parks. They’re also ready for some extra responsibility especially if they have an older sibling or they brought along a friend. This will take some pressure off of you to parent for your entire vacation.

On the downside, the teen years are starting to set in along with the attitude. Have you seen Inside Out? Ugh. Kids at this age might declare that they are too old for all that little kid stuff or pose for a magical photo op.

Disney rules state that 14 years old is the minimum age for a child to enter a Disney Park on his or her own. If you feel comfortable with that, embrace this new era of parenthood and take advantage of some new-found freedom.

At what age did you take your kids to Disney World for the first time?