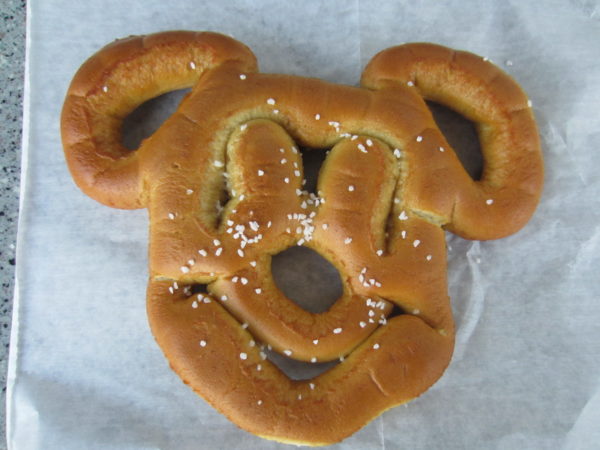 It’s no secret that food is a big deal in Disney World.

Table Service Restaurants serve up full-course meals; counter-service (or quick-service) restaurants also serve full-meals at a much faster pace. What a lot of people don’t talk about though is that there are a ton of really good snacks available that are less expensive but just as good – especially if you don’t want a full meal.

It’s often a good idea, and many seasoned Disney fans agree, to eat a large breakfast, find a snack for lunch, and eat a larger meal around late afternoon. Snacks are a great addition to any Disney dining adventure because they can really round out the meals and make your dollar stretch even further. It’s even better when those snacks appeal to everyone in the family! What’s more, most of these are snack credits on the Disney Dining Plan!

Let’s take a look at some great family-friendly, kid-friendly, and budget-friendly snacks in Disney World.

If your kid likes cookies (and who doesn’t?) the Carrot Cake Cookie at the Trolley Car Café in Disney’s Hollywood Studios is a great treat! This “cookie” is actually more cake-like with a top and a bottom and sweet cream cheese icing in between. Since it’s not an icing filling, it’s not too sweet, and it’s only $4 at this Starbucks locations in The Studios!

The Cheshire Cat Tail at Cheshire Café in Magic Kingdom‘s Fantasyland, on the other hand, is a very sweet treat. The pastry dough is filled with chocolate sauce and drizzled with pink and purple icing on top. If you’re looking for an affordable sugar rush, it will be $5 well spent!

You can find Chocolate Covered Bananas just about everywhere in Disney World. It’s sold mostly on mobile carts, but you can also find them in some quick-service locations like Big Top Treats, which sells an unfrozen version! Most locations sell the frozen version, and they’re kind of hard to bit into, but they melt quickly in the Florida heat. You can also get them, frozen or unfrozen, with or without nuts. This is a great snack if you want the nutrition of the banana with a little sweet treat of the dark chocolate. If you choose the version with nuts, you’ll even get a little bit of protein in there! Without nuts, the banana, frozen or un frozen, is $4, and the nut topping with cost another $1.

Cotton Candy is a classic sugary snack at just about any theme park, amusement park, or local fair you go to, but everything tastes better in Disney World. The Main Street Confectionary on Magic Kingdom’s Main Street USA makes their cotton candy fresh daily, and it’s appropriate that this quintessential snack is served on Anywhere, Main Street. Plus, it’s only $5.

Because Disney can’t do anything “normal”, why not try the Cream Cheese Pretzel? This cream cheese stuffed pretzel is only available at Magic Kingdom and Disney’s Hollywood Studios, but you can also get a spicier jalapeno cream cheese pretzel at Disney’s Typhoon Lagoon! They’re all just $5.

Disney World makes some awesome cupcakes. You can find them all over the theme parks and Disney resort hotels, and they all have unique and awesome theming for lands and characters. These elaborate works of culinary are only $5.

The Dole Whip is a favorite, dare I say essential, snack during your Disney World vacation. This pineapple soft serve “ice cream” is actually dairy free and gluten free, vegetarian and vegan, so anybody can try this sweet and tangy treat. It’s only available in select locations including Aloha Isle in Magic Kingdom, Tamu Tamu in Disney’s Animal Kingdom, Marketplace Snacks in Disney Springs, Pineapple Lanai and Trader Sam’s Grog Grotto both at Disney’s Polynesian Resort, and The Drop Off pool bar at Disney’s Art of Animation Resort.

There are several versions of the Dole Whip including the traditional soft serve, a float, with rum, and in a souvenir bowl, and prices range from $5-10 depending on which version you choose.

Goofy’s Glaciers are Disney’s version of slushies, slurpies, ices, or whatever you call them. They are available in a variety of flavors including strawberry, blue raspberry, passion mango, and lemonade, and you can even mix flavors! Just head on over to Goofy’s Candy Company at Disney Springs and pick your poison. You can also get a Goofy Glacier at Big Top Souvenirs in Magic Kingdom’s Fantasyland. The drinks are plenty large enough to share, if you feel so inclined, and they’re only $5.

For another icey treat, check out Kakigori, available in the Japan Pavilion in Epcot‘s World Showcase. Kakigori is a Japanese version of shaved ice, and it’s available in three flavors. You can even add milk for an authentic Japanese experience. Without milk, Kakigori is $4 and with milk, it’s $5.

The Mickey Premium Ice Cream Bar is a necessary treat every time I go to Disney World. It’s vanilla ice cream in the shape of our favorite mouse dipped in chocolate and served on a stick. While this seems pretty unremarkable, remember that this is Disney World. The ice cream is perfect, and the chocolate is super thick. Try one, and you’ll realize the difference. It’s available at various locations throughout Disney World like carts in the parks and snack locations at the Disney Resort Hotels for just $5.

Pretzels are a classic snack anytime, anywhere, but Disney’s pretzels are shaped like Mickey, which automatically makes them better, and especially more appealing to kids. Mickey Pretzels are sold in various locations around the resort on snack carts and at quick-service stands. It’s served with cheese sauce for $5.

The Orange Swirl is an orange-flavored version of the Dole Whip. It used to be called the Citrus Swirl for a brief time since 2012 after the formulation was changed, but Disney has returned to the pre-2012 version that is just orange juice and Dole Whip Vanilla Soft Serve. It’s both sweet and it has a little bite to it, and it’s a great way to cool down on a hot day. You can only get the Citrus Swirl at Sunshine Tree Terrace in Magic Kingdom’s Adventureland, and it’s $4.

13 – Side of Tortilla Chips

This is more of a snack hack, and who doesn’t love tortilla chips?! Head on over to Pecos Bill Tall Tale Inn and Cafe in Magic Kingdom’s Frontierland and order a side of chips. They’ll come plain, but you can use the restaurant’s famous toppings bar to load up and customize your chips with whatever you want, which means your kids won’t complain about any of the toppings! Choose from cheese, salsa, corn, pico, sour cream, olives, jalapenos, and much more. For $5, this is a pretty good value!

Pongu Lumpia is a snack available in Pandora – The World of Avatar in Disney’s Animal Kingdom. These little pillows of goodness are fried wonton wrappers filled with cream cheese and pineapple, and they’re delicious. You get three of them for just $3!

Every kid loves popcorn, right? Popcorn is a classic salty snack, and you can find it in every park in Disney World. You can get them in regular disposable bags, but you can also get them in souvenir buckets, which are refillable. The popcorn itself is $5, and you’ll pay a bit more for the souvenir bucket.

The Warm Cinnamon Roll at Gaston’s Tavern quickly became famous for it’s warm, ooey, gooey deliciousness, but it remains popular because it really is very good. It’s also huge, so you can definitely share it with the family; just don’t forget to ask for extra icing! Even better, it will only set you back $5, and it can easily be your breakfast meal!

What is your favorite Disney snack?