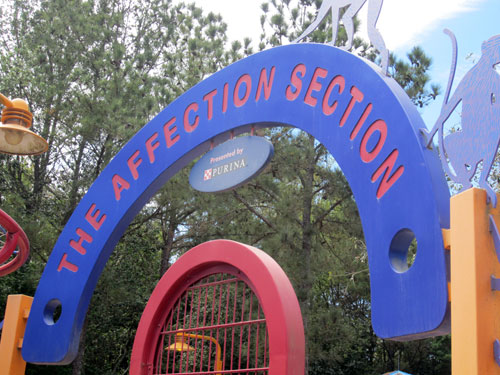 For many years early in the park’s history, Disney ran a marketing campaign for Animal Kingdom with the tag line “Nahtazu”, or “not a zoo”. They wanted to drive home the point that the park wasn’t a traditional zoo, with not-so-happy animals living in cages. The point is well taken – the Animal Kingdom park is not really a zoo – there are plenty of Disney styled rides, shows, and attractions.

But there is one element of Animal Kingdom that is like many common zoos, and even dare I say like many common petting zoos. It is the Affection Section. However, like all things Disney, the uncommon Disney magical touches override any concerns of “I can see this anywhere.” Because you can’t see this petting zoo, done the Disney way, anywhere else.

There are actually quite a few interesting things in this section of the park. You fill find plenty of displays on the environment, an animal hospital where you can sometimes catch an examination or even medical procedure going on, and a place for Disney character greetings.

Affection Section is an outdoor area where you will find real, live sheep, goats, and pigs. You are free to pet these animals, but not feed them.

Sound pretty common? Maybe, until you consider these four special Disney touches that make The Affection Section a special place to visit:

Unlike their distant animatronic cousins, the animals at the Affection Section are real and alive. They are generally pretty calm, and willing to let folks touch and pet them. They also aren’t aggressive, as animals in most petting zoos are, because Disney guests do not feed these animals. Since the animals don’t associate you with food, they don’t attack you. And when the animals get a bit tired of the attention, they can wander on their own into an area without guests.

Nobody goes into a Disney park expecting peace and quiet. You receive and expect a constant stream of energy, music, and motion.  That’s good!  However, sometimes it can be nice to have a little break from the sensory overload. The Affection Section is a chance for a little quiet and a little real nature.

As with all real animals, there are real, well, remains. Some very hearty Disney Cast Members quickly clean up after the animals, keeping the area clean and amazingly smell-free.

Since Rafiki’s Planet Watch is definitely off the beaten track, and requires a train ride to reach, it rarely has big crowds. You can easily wonder around and enjoy the area and the animals without the usual pressing crowds.