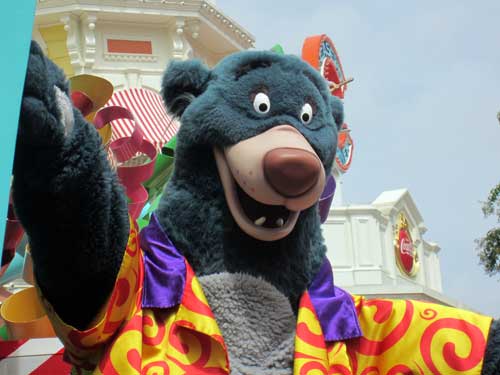 Disney released The Jungle Book, their 19th animated feature, on October 18th, 1967, just ten months after Walt Disney’s death. In fact, The Jungle Book was the last film Walt Disney produced; he passed away during production of the very popular film.

The movie, based on Rudyard Kipling’s book of the same name, received critical acclaim.

On April 15th, 2016, the film was revived with modern day computer generated graphics along with a real boy. Despite the fact that it looks like this movie was filmed deep in the jungles of India, it was actually filmed in the concrete jungle: downtown Los Angeles! On the opening weekend, the film earned over $103 million and has grossed almost $300 million to date.

The storyline of the 2016 story is pretty close to that of the 1967 version with a few differences, though I won’t give too much away in case you haven’t seen it!

First, Walt did not want his animated family movie to be as dark and sinister as Kipling’s book, so he removed a lot of the scary parts of the book when creating the movie. It seems, however, that the new version returns to this dark nature.

Both stories are wonderful in their own right, but young children in the theater were obviously scared during some parts. Also, whereas the Mowgli character followed a pretty girl into the man village in the original movie, Mowgli stays in the jungle with his animal family in the modern rendition.

Nonetheless, two very important things survived the almost 50 year gap: the music! “The Bare Necessities” and “Wanna Be Like You”, both written by the Sherman Brothers, make a significant appearance in the 2016 movie.

This movie brings feelings of nostalgia for the older crowd both because they likely grew up watching the animated version and because they can share this lovely movie with their children (or grandchildren!).

I think that Disney can capitalize on this classic movie in more ways than one, so here are some ideas on how to incorporate ‘The Jungle Book’ movie into Disney World from an armchair Imagineer!

Animal Kingdom is probably the most logical place for this movie to earn a spot in Disney World, and there are several ways this could happen.

A character meet and greet would be the easiest and most obvious way to bring the movie to the parks. Baloo has such a great personality, and King Louie, though a bit scary at times, is the classic villain.  Mowgli would join the crew too!

Disney World could also create a playground mirroring the chase sequence at both the beginning, when Mowgli is with his wolf pack trying to out-run Bagheera, and the end of the movie when Mowgli is teaching the other wolves his tricks. Kids of all ages would love to climb through the trees and vines like Mowgli in an exciting new playground.

Another fun activity at Disney’s Animal Kingdom would be a type of animal meet and greet. Obviously, I’m not suggesting that kids pet a black panther or a wolf, but learning about these and other animals in the movie as well as the danger of wild fires, or “the red flower”, can help save endangered animals like the panther and the elephants and prevent deforestation and destruction. This continues Walt’s legacy because he always wanted his parks to be both entertaining and educational.

Depending on where Disney’s Hollywood Studios goes in the next few years with the renovation and rebranding of the park, a new CGI ride like Soarin‘, Star Tours, or the promised Millennium Falcon-inspired ride would be a very fun addition! Like the playground idea I discussed above, this ride could put guests right in the middle of the action in the jungle!

In the Magic Kingdom, I would return to the original animated series and add a ride like Dumbo the Flying Elephant or the Magic Carpets. Little kids would enjoy spinning around a monkey temple on the backs of monkeys while King Louie sings “Wanna be Like You” from the middle of the ride!

A more realistic attraction would be an overlay of the Jungle Cruise. Wouldn’t it be fun to be floating along in this popular attraction and see Baloo come floating alongside the boat singing “Bare Necessities”?

Finally, the Jungle Skipper Canteen next door to the Jungle Cruise would be a great place to hold a character dining meal. These experience not only draw large crowds but also lots of money. Fans will pay a premium to dine with their favorite characters including Baloo, Mowgli, Bagheera, and others.

Should Disney add ‘The Jungle Book’ into the parks?  How?