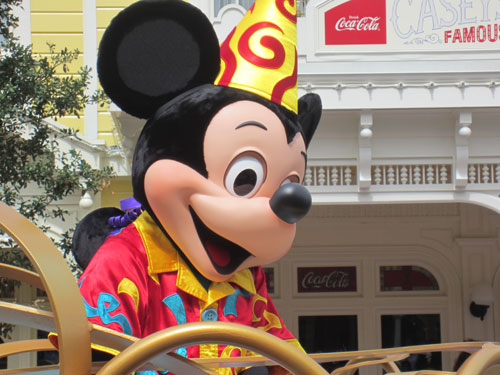 Five Things Huge Disney Fans Do On Every Trip

If you’re like me (and you’re here reading this, so you probably are) you’re kind of a big Walt Disney World fan. And by kind of a big fan, I mean your house might have Disney decorations, you pay for subscriptions to Disney-themed online magazines or websites, you named a pet after your favorite Disney character, the whole nine yards. You’re actually a HUGE Disney fan.

I recently had a conversation with a friend who is a fellow Walt Disney World enthusiast where we talked about the things we would never skip on our WDW vacations. Here are five things huge Disney fans do on every trip:

5. Take a Picture With The Icons

No, I’m not talking about Mickey, Minnie or Goofy! Every huge Disney World fan knows that each park has an icon, or as Walt Disney used to call them, “weenies.” They all have a central structure that kind of beckons you toward them (not in a creepy way!), inviting you to explore even more of the park.

The Magic Kingdom has Cinderella Castle, Epcot has Spaceship Earth, Animal Kingdom has the Tree of Life, and Hollywood Studios has…ummm…well, Hollywood Studios is back to the Chinese Theater (or maybe even the Tower of Terror) as it’s central icon. I know I’ll never take a trip to WDW without having my picture taken in front of all of these famous spots.

4. Take a Spin on the Monorail

On my last trip with my family we had no reason at all to ever get on it. We were staying at Disney’s Saratoga Springs Resort and really didn’t park at all between Epcot and Magic Kingdom. But, on our last day when we were wrapping up our evening on Main Street, USA, I asked my wife if she would mind taking the kids for a spin around the resorts on the monorail line. Why? Because no one should ever go to Walt Disney World and not hear “Please stand clear of the doors. Por favor mantenganse alejado de las puertas.”

It’s truly a rite of passage for any true huge Walt Disney World fan and I know I would have regretted not experiencing a ride until our next trip rolled around.

The Dole Whip, found in Adventureland in the Magic Kingdom, is without a doubt the most popular dessert option anywhere in Walt Disney World. If you haven’t had one, it’s something you absolutely have to take on during your next trip to WDW (tip, you can also find them at the Pineapple Lanai outside the lobby of Disney’s Polynesian Village Resort).

As you may have guessed from that last sentence, a Dole Whip is a soft serve pineapple-y dessert that guests sometimes wait in line for an awful long time to get their hands on. The demand for this frozen treat was so great, actually, that the Disney higher-ups moved it’s location in Adventureland to a larger counter with more registers and cast members. If you’re not a fan of the Pineapple Dole Whip and would rather have something a little different, try a Citrus Swirl from the Sunshine Tree Terrace. This is a similar treat to the Dole Whip but instead of Pineapple it is an orange and vanilla flavored soft serve. Honestly, you’re not gonna go wrong either way!

While many families are crashing and heading back to their resorts at the end of the night, oftentimes my family and I are on our way out the door (kids already in their pajamas) to catch shows like Wishes!, Fantasmic, and Illuminations. To help my kids stay up and make the shows, we often take a break in the room or at the resort’s pool in the middle of the day. That way they get to recharge the batteries a bit, take a nap, and get out of the sun for a few hours. By the time nightfall rolls around, they’re ready to get out there and get back at it! And, just in case they do fall asleep in the parks before, during, or after one of the shows (we always bring their strollers, just in case) they are already in their pajamas and all I have to do is carry them into their hotel beds as soon as we get back to the room. It helps eliminate a few episodes of Mickey Mouse Clubhouse at 11pm!

One thing that my family makes sure we do each and every trip is leave some times available to wait in line to meet our favorite characters. Actually, I did this as a single adult, an engaged guy, and a newlywed as well! I’ve always loved the characters and to this day love getting my picture taken with the newest ones Walt Disney World marches out there each and every year.

Just in the past 6 months we had our first opportunities to meet Kylo Ren, Chewbacca, Joy and Sadness from Inside Out, and Olaf. We even had the chance to dance with Judy Hops and Nick Wilde from Zootopia during Move It, Shake It, Celebrate It in the Magic Kingdom! One great tip is to make sure you utilize the FastPass+ System to meet those characters that you absolutely can’t miss. You can get FastPassses to meet Mickey, Minnie, Goofy, the Princesses over in Princess Fairytale Hall at the Magic Kingdom, Tinkerbell, and quite a few more!

So there you have it, my Top Five Things Huge Disney Fans Do On Every Trip! Of course, my list probably isn’t the same as your list, so if I missed your favorite thing that you make sure to do each and every trip, please be sure to let me know! Leave a comment here or email me at phil@eartotheretravel.com! As always, thank you so much for reading!

What one thing do you do on every Disney trip?